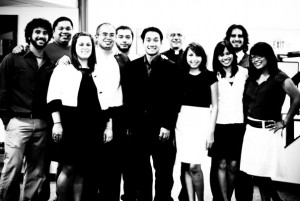 The University of Houston’s Catholic Newman Center bids one of their own a bon voyage.

With tears and smiles in their eyes, the individuals that got to know Fr. Dan Walsh recalled memories they shared with him as the chapter of his life at the University of Houston comes to a close.

Walsh, Director of Campus ministry for UH and TSU, and was at the Catholic Newman Center for three and a half years. Before coming to UH, he worked with seminarians in Brazil and several parts of the United States.

During his time at UH, Walsh created strong relations with his co-workers, as well with the students that visited the UH CNC. Changing lives and making a difference at the UH CNC was something that Walsh did humbly and maybe didn’t realize it.

“Fr. Dan, thank you for being who you are. I used to be intimidated by the catholic faith and it is because of you that I was able to see the true beauty of Catholicism. You have changed my life without ever knowing it. I will always think of you when I go to the CNC…always. But I know we cannot be selfish and I know God has sent you somewhere to touch a young life as you have touched mine,” Nadal said.

Office Manager for the UH CNC Dolores Perez said, “I thank Fr. Dan for sharing the love that he has for God with me. He also shared this love with everyone at the Catholic Center.”

As Walsh created a difference at the UH CNC, Campus Minster Giovan Cuchapin reminisces on the differences that were made.

“Fr. Dan’s effective ‘ministry of presence’ and ‘relational ministry’ gave the UH CNC a boost and influx of students. He is a good preacher; he knows how to challenge the minds of the young adult. A lot of students would come to him for advice and celebrate the sacrament of reconciliation. He is very pastoral in his approach to ministry,” Cuchapin said.

When the news came out that Walsh was moving to Pittsburgh, many people on campus asked “why”. Others could not believe it, but it was the truth and it was what Walsh was called to do. His community, the Congregation of the Holy Spirit also known as the Spiritans asked him to go to Pittsburgh, PA to be a pastor and director of formation. He will work with the seminarians who are at the beginning stage of their preparation for priesthood or to become brothers. The men in formation will attend Duquesne University and will live with Walsh in the parish.

Strong emotions ran through many individuals when word spread that Walsh was leaving. Although Walsh said it will be difficult to leave his position at UH, he is excited to return to his hometown and embark on new challenges.

“As you can imagine, it is sad to leave a place where you know people and are known. I have been very blessed to work in campus ministry. My new assignment will be challenging and it is always difficult to go to a new place. I have been fortunate in that I have always enjoyed each assignment and I hope that the new parish will be fulfilling. I will miss everyone at UH. My family is in Pittsburgh and it would be good to be at home. I left Pittsburgh in 1982, so I will have to relearn how to get around my hometown. I would like to thank everyone who made my stay at the UH Catholic Newman Center so enjoyable. Let’s continue to pray for each other,” Walsh said.

The UH CNC wishes the best for Walsh, and opens the doors and their hearts to the new Priest Fr. Huy Quang Dinh. 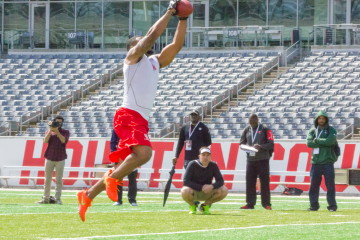