The University of Houston-Victoria may soon switch parent system to Texas A&M.

Morrison and a group of Victoria business leaders thinks that the UH System did not have the same vision as the Victoria campus.

In a video posted on the bill’s Facebook fan page, Morrison explained why she proposed the bill.

“I think our mission is different from the UH system now,” said Morrison. “I think it’s time for us to look for a different partner that has a mission that we have. That is the A&M system.”

“The UH-V has been very successful with the partner of UH system, but now that we are a four year institution our missions are different,” continued Morrison in the video. “The UH system wants to be the best metropolitan system in the country and they are trying to be and vying to be a tier one institution. Those are very admirable goals.”

Morrison and Victoria business leaders argue that under the new parent system UH-V will become a true destination campus that will have an impact on economical development and educational development.

“The A&M system already has a tier one institution and so they are working with the regional institutions to be very successful and I think that Victoria will fit in there very well,” said Morrison.

When asked to comment on the bill, UH-V administrators declined because state agencies and their boards are specifically prohibited from advocating for or against the passage of any particular piece of legislation.

UH System Board Chair Carroll Ray and UH System Chancellor Renu Khator released a statement saying, “as UH Victoria transitions into a four-year ‘destination’ university of choice that offers quality, accredited, face-to-face and online programs to students in the Gulf Coast region and beyond, we believe the UH System remains the best partner for UH-V and its students.”

“We remain firmly committed to a destination university in Victoria,” continued the release. “We will work closely with the Legislature to ensure that the higher education needs of Victoria residents and all of Texas are fully served.”

Those who are against the switch are afraid that the degrees offered by UH-V will be affected if the university leaves the UH system.

“As a student at UHV, I feel if the change is made that it should be best for the students. I’m not against the switch, but I’m not for it either. It really doesn’t matter to me as long as it better for the students attending the university,” she said.

According to the Texas Legislature’s website, HB 2556 is still the Committee of Higher Education. The Texas legislative session for this year ends on May 30.

Undocumented UT graduates set to speak out on deportations 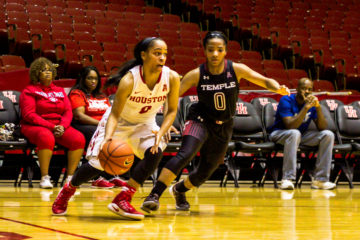