July 18, 2021 Francisco Casillas
Home»Colleges»News for Coogs»Former President of Mexico Vicente Fox to Speak May 3 at UH
News for Coogs 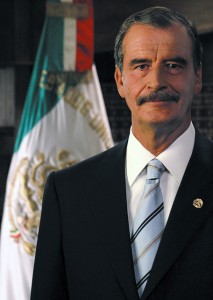 Former President of Mexico Vicente Fox will speak on “Leadership and Spirituality in America” at 3 p.m. Tuesday, May 3 at UH, Agnes Arnold Hall, auditorium 1. The lecture is free and open to the public. There also will be a question-and-answer period.

Fox was the president of Mexico from 2000 to 2006. When elected, he ended the 71-year rule of the Institutional Revolutionary Party. While in office, he focused many of his early efforts on improving trade relations with the United States, calming civil unrest, reducing corruption, crime and drug trafficking. He studied business administration at the Universidad Iberoamericana and pursued a Top Management Diploma at Harvard Business School.

Fox, who was born in Mexico City in 1942, has four adopted children. After his presidency, he wrote an autobiography, “Revolution of Hope: The Life, Faith, and Dreams of a Mexican President.” He is involved in public speaking and establishing his presidential library, Centro Fox, which focuses on the development of democratic leadership in Latin America.

Fox’s appearance on the UH campus is sponsored by the Gülen Institute and UH Graduate College of Social Work.