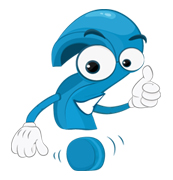 It may come as a surprise to many but UHCL does not have an official mascot.  In response to student demand administration recently formed a Mascot Leadership Team to oversee the mascot search.

The history of the UHCL mascot, or lack of one, is filled with indecision, competing priorities and budget issues.

UHCL had an active intramural sports program in the 1980’s.  Players and fans saw the need for a mascot they could rally around.   Alumni association leaders  pushed for the Red-shouldered Hawks as the official mascot.  Consensus was never achieved and UHCL was still without a mascot by the end of the decade.

The UHCL community was invited to choose one of the semi-finalists and based on the name, create a pictorial representation, slogan and ideas for mascot use.

In October, the five finalists were: Explorers, Voyagers, Lakers, Hurricanes and Challengers.

The Hurricanes, designed by Scott Martin, was selected as the UHCL official mascot.

UHCL officials intended for the design to appear on all mascot paraphernalia and souvenirs representing the UHCL intercollegiate sports and recreation teams.
Implementation of the design was derailed as UHCL focused its attention on the search for a new president after the resignation of President Thomas Stauffer in spring 1991.

At the time the Texas State Legislature, on the verge of a budget crises, cut higher education funding.  This led to the shuttering of recreation sports at UHCL. By fall 1992, the Hurricanes mascot had faded into obscurity.

Students planning the Second Annual Welcome Back to School Bash created a symbol out of the blue and green UHCL logo mark to promote the event.

The design  became known as “Blockie” which the university trademarked and uses to promote student life events.

The Egret has been mistaken as the official mascot by Wikipedia and stateuniversity.com.

Calls for a real mascot started to grow in the 2000s.  The Mascot Leadership Team was formed in summer 2010 and is currently in the first phase of the search process.

Father and son exhibit started as book of poetry and photos