The Mexican national team overcame an early two goal deficit to the U.S. to win 4-2 in Saturday’s Gold Cup Final at the Rose Bowl in Pasadena, Calif.

This clinched their second consecutive Gold Cup and a berth in the 2013 Confederations cup.

Even with an early 2-0 deficit Mexico dominated the U.S. the entire game. Giovanni Dos Santos, Chicharito and Pablo Barrera all had opportunities to open up scoring before the U.S. scored a goal off a corner kick in the 8th minute.  Michael Bradley was able to take advantage of a miscue by the Mexican defense to come in and score off the corner for the U.S.

Mexico continued to be aggressive and reach U.S. goalie Tim Howard numerous times but the goal did not come. In the 22nd minute Landon Donovan was able to take advantage of yet another lapse in the Mexican defense to take the 2-0 lead.

Mexico was able to keep its head up and seconds after being forced to make a substitution for and injured Carlos Salcido, Javier “Chicharito” Hernandez was able to put a well placed pass to Pablo Barrera to cut the US lead down to one goal.

In the 36th minute Andres Guardado tied the game at 2-2 off a cross from Dos Santos, that was intended for Chicharito, and Guardado was able to tap in pass a diving Howard. In the 40th minute Mexico was forced to make another substitution due to injury when captain Rafael Marquez could not continue after a collision with Clint Dempsey.

Mexico was able to take a 3-2 lead five minutes into the second half with a second goal by  Barrera. The United States pressed harder than they had the entire game to put pressure on the Mexican team.

Even with a late defensive substitution, Mexico continued to attack, and in the 76th minute, Giovanni Dos Santos orchestrated the goal of the tournament to put Mexico up 4-2.

Mexico won its second Gold Cup and 6th overall. They also earned the CONCACAF’s spot in the 2013 Confederations Cup in Brazil, which serves as a preview of the World Cup.  Mexico also took home three of the four individual awards handed out for the tournament. They won the fair play trophy and Chicharito was named MVP and Top Goal Scorer of the Tournament.

During the celebration and award ceremony, the Mexican team wore green T-shirts that read “Mexico campeon”, but taped pieces of paper that read “+5” as a sign of solidarity with the five Mexican players who were removed from the team in the beginning of the tournament after testing positive for doping.

Mexico will now prepare to take a much younger team to Argentina to participate in the Copa America which begins next Saturday. 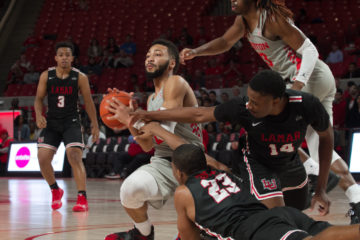