As a fourth-generation Mexican-American, it was time for me to make my obligatory pilgrimage to Los Angeles.  For those non-Chicanos that have no idea what I’m talking about, it’s required that every card-carrying Chicano make the trek once in their lifetime.

I was short on vacation time so I opted to perform my penance by flying with a budget airline instead of the mandatory bus ride.  This act of hardship allows us to admit our sins against Chicanismo to complete strangers, preferably non-Latinos.

The three-hour plane ride gave me a chance to regale my captive audience with confessions of my inability to find a good taco place and attending the occasional murder mystery dinner.  Upon landing, I vowed that I would watch more Spanish TV (with subtitles of course) and show off my Cesar Chavez black eagle tattoo more often.

My wife and I booked a hotel not far from East LA, the Chicano Mecca.  Our LA trip would start with paying tribute to the Chicano Movement and Blowouts of the 60s while enjoying the beautiful murals that adorn city buildings.  Like a true “Highspanic”, the cultural experience had to be finished by 3 pm because we had a Hollywood tour scheduled followed by a drive up Beverly Hills.

While my wife was enjoying her complimentary breakfast, I was applying sunblock (to keep from getting tanned in the 70 degree heat) and Googling “East LA tourist attractions”.  Needless to say, Google results were sparse and mainly consisted of eateries.

It was on one of these obscure websites that I found the Latino Walk of Fame, which recognizes Latino historical figures with sun plaques on Whittier Boulevard in the heart of East LA (as opposed to the Hollywood Boulevard stars).  As soon as my wife finished her bagel, we jumped in the rented Toyota Corolla and headed straight there.

The first thing I noticed about the Chicano Mecca was the lack of Chicanos.  Apparently someone forgot to tell me that after the civil rights movement, many Chicanos became upwardly mobile, and the exploding Latino middle class chose to move their families to other parts of LA to escape the poverty and crime of the 70s and 80s.

Walking down the Latino Walk of Fame was like being transported to Aztlan (the mythical homeland for Hispanics).  The 42-inch burgundy and gold marble sun plaques allowed me to muse with Cesar Chavez and practice my curve ball with Fernando Valenzuela, the famed left-handed Dodger pitcher.

That is until the locals started to stare and point at me as I caressed the sundial of Edward James Olmos.  It was then I noticed we were the only tourists on the boulevard.

The spectacle of a tall non-Spanish speaking Latino vacationer taking silly poses with the plaques in the street amused the hard-working Latino immigrants as they rested at the various bus stop benches on their way to a real job that gives them calluses as opposed to carpal tunnel.  Apparently the Latino Walk of Fame is not as famous as that other Walk of Fame in Hollywood, which by the way, is much more unkempt than Whittier Street.

Chicanos will find that there are many familiar names on the plaques that line both sides of the street, like Jaime Escalante of Stand and Deliver fame.  While there is space for 280 plaques, the actual number engraved is fewer.  The engraved ones are scattered up and down the street, in no consistent order. 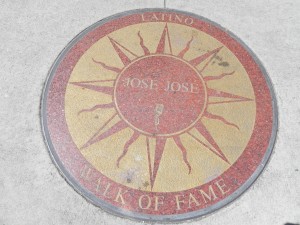 Many of the celebrities immortalized are more recognizable to immigrants and Spanish media consumers than Chicanos.  My wife, whose parents are from Mexico, was happy to educate me on the successes of José José, Maribel Guardia and other Latin American celebrities.  In a bit of irony, José José’s star on the Hollywood Walk of Fame was spelled correctly while on Whittier, the crucial accents were sorely missing. 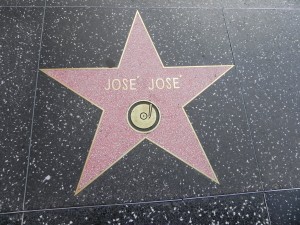 After walking about an hour among the Latino elite, it was time for me to head downtown.  It was a great experience pondering the accomplishments that landed each one a spot on the Latino Walk of Fame.  From entertainers to politicians, it showed just how much Latinos in America have accomplished.

On a personal note, I was able to come to terms with my own brand of Chicanismo.  I may not speak Spanish, play soccer nor have the Virgin Mary tattooed on my chest, but because of our heroes past sacrifices, I am free to eat ketchup on my tamales and put my kids in private school without losing any of my Latino identity.

According to their website, the Latino Walk of Fame can be found at 4700 Whittier Blvd., East Los Angeles, 90022.  When you get to Whittier the sundials start a little after S Burger Ave (just after the 710 Freeway) and end just before Clela Avenue.  You must get out and walk to find the sundials because you won’t be able to see them from the car.  The sundials line both sides of the street.

Quick facts about Hispanics and education