“The Case of Joe Campos Torres” debuts to a packed house

At first, it seemed like the screening of the documentary film, “The Case of Joe Campos Torres” at Houston Community College was going to be a sparsely attended event known only to hard-core historian buffs and local civil rights activists.

Jose Campos Torres was an Army veteran arrested for causing a disturbance at a local club in Houston’s East End in the late 1970’s. His body was found in Buffalo Bayou after the city jail refused to accept him due to bodily injuries that were sustained sometime after his arrest.

Within five minutes of the start time, a steady stream of supporters filtered through the double doors of the art classroom. The diverse audience of families, college students, and activists of all colors quickly filled the room to capacity that borderlined a fire hazard with an unofficial attendance of 80.
Friends embraced and reminisced about civil rights victories won and lost as they updated each other on the latest acquaintance that is no longer around to “fight the good fight”.

The camaraderie displayed at the screening stands in stark contrast to the tensions caused by the police misconduct case that plagued Houston almost 30 years ago and culminated in the Moody Park Riots.

Shot around Houston, the short documentary chronicled the Latinos’ reaction to what they saw as a social injustice against their community.

The opening scene shows a police officer seemingly push a citizen in the face, which set the tone for the rest of the film told from the Chicano community’s point of view.

While the documentary was short, approximately 30 – 40 minutes in length, there were some technical difficulties that prolonged the viewing to about an hour.

As the audience waited for the technical issues to be resolved, a moderator explained the reasoning for the actions of community leaders at the time.

Once the movie was back up, viewers were treated to an assortment of interviews and speeches from the era’s local civil rights leaders and family members of Jose Campos Torres as they organized their response to the city and advocated for an independent citizen review board that would oversee HPD. A request that was ultimately denied.

Footage was also shown of the 20-ft. dock the veteran is believed to have been pushed off, in an area known as “the Hole” to officers of the time. Emotions in the audience ran high as victims of police brutality recounted their encounters with HPD on screen.

“The Case of Joe Campos Torres” is not your traditional documentary. It feels like a compilation of raw footage taken from the news station’s archive dusted off to remind viewers that before video cameras were able to bring police misconduct to light, the family of Jose Campos Torres had to rely on the support of their community to help pursue justice.

The film was produced in 1977 at Houston’s KPRC-TV, Channel 2 by Tony Bruni. It was written and edited by Carlos Calbillo and reported by John Quinones, who is now with ABC News in New York City and hosts the series “What Would You Do?”.

Picture of the Week: A Portrait

“The Case of Joe Campos Torres” debuts to a packed house 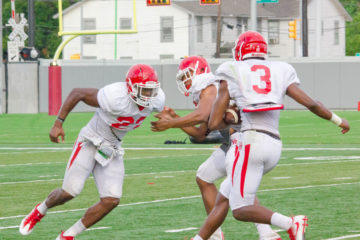