Cowboys & Aliens, directed by Jon Favreau (Iron Man), is a film not really about cowboys or aliens but about Harrison Ford’s inability to age. The man is on the brink of 70 yet he still rides, shoots and dominates next to the anti-hero Jake Lonegran, played Daniel Craig.

If anything, this film is worth watching because of the plethora of manly six packs at every corner and Olivia Wilde’s piercing eyes. Besides that, the plot lacks substance.

The film begins when Jake wakes up in the 19th century American frontier. He is bleeding profusely with no memory, has a bizarre electronic bracelet attached to his wrist.

Following this introduction, along with many beautiful scenic moments of the green American pastures, Jake wanders into a nearby town and then very little happens that does not involve him beating up anyone that gets in his way. After being arrested for past adventures that everyone, but Jake, seems able to recall, the cheesy-ness really begins.

Aliens start attacking and stealing townspeople by sucking them up into their spaceships. No one knows why, so of course they turn to the man who’s wanted for theft, murder and other crimes that he can’t remember committing.

Burly Jake and Harrison Ford’s offensively admirable character with an immortal body, Colonel Woodrow Dolarhyde, leads a group of townspeople that includes Olivia Wilde’s Ella, who seems to know too much, a boy named Emmett and a loyal dog to go get their people back. They, along with pistol-packing townsmen, set off to end the alien invasion.

Everything falls into play predictably. Good men die, bad men end up having good qualities, and small men grow strong. Dolarhyde’s annoying, cowardly, bullying son (played by Paul Dano) finally matures after the alien nonsense. Ella’s secret is brought to light and of course, the aliens are defeated after the cowboys join forces with the random tribe of Native Americans they meet on their road to justice.

The plot is linear and it’s hard to empathize with the characters because the scenes flash by quickly without room to fully take in the subject matter, there are some memorable moments.

The dog is great. He wags his tail on cue, whines when he needs to and makes the cutest faces when Jake gives him the slightest amount of attention.

The dialogue in the film is sparse, but many lines hit home with the right amounts of sarcasm. Jake and Dolarhyde convey irony, irritation and manly-ness with the blink of their cowboy eyes.

Cowboys and Aliens is the kind of film you want to watch at home at your leisure to enjoy all the excessive testosterone and clichés of the western world. It’s not worth going to the theater to watch, but as a rental it’s fun to laugh at.

UH students are seeking solutions for a variety of diseases 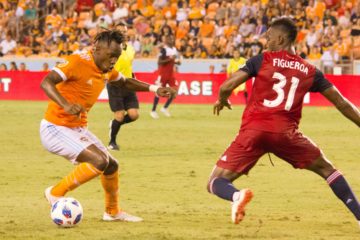