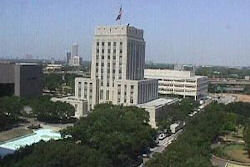 “The proposed map cracks communities of interests and dilutes the voting strength of Latinos in Precinct 2. Despite the fact that Latinos drove the overwhelming growth of the population since the last census and now constitute over 40% of the population in Harris County, Latinos are poised to lose the only seat on Commissioners Court where they have an opportunity to elect a representative of their choice,” said Gonzalez.

Gonzalez said, “The inclusion of a suburban community, Kingwood, into Precinct 2, is neither necessary nor justified. Alternate maps have been drawn by members of the community that show that it is possible to increase the population and voting strength of Latinos in Precinct 2 without adversely impacting neighboring precincts from electing a representative of their choice.”

The plaintiffs seek to prevent the county from using the proposed plan in any future elections.

According to data from the U.S. Census Bureau, Harris County has a population of 4,092,459 with 40.8% of persons being of Hispanic or Latino origin.  On August 11, 2011, the bureau plans to release a more detailed summary of the data to the public.

The county recently held public hearings concerning the redistricting maps.  A majority of Latinos spoke out against the maps, as did Kingwood and Clear Lake residents who voiced their concern about being in the same district.

“We need a map that is representative of the County and that is fair for Latinos,” concluded Gonzalez.

Communications to Harris County Judge Ed Emmett’s office have not been returned.