For the last five years two men have dominated the world of tennis: Roger Federer and Rafael Nadal.

Roger held the number one position in the men’s Association of Tennis Professionals ranking for a record of 237 consecutive weeks and 285 weeks overall; he also holds the record of 16 Grand Slams singles titles.

Rafael on the other hand, who recently lost his number 1 rank to Novak Djokovic at Wimbledon, has only held the number one position for 56 consecutive weeks and 102 weeks overall, and is 6 Grand Slams shy of Roger Federer. But because of him the ATP was no longer a one men show, and the Federer – Nadal era began.

Their rivalry was exciting, it was nerve-racking, it was intense, joyful, beautiful, admirable, epic, and everything a tennis fan wanted.

Of course fans had, and still do, their favorite. But even so, there were a few tennis fans who like me couldn’t decide which one of the two to root for, so they just sat admiring and enjoying every minute of the majestic tennis being performed by Roger and Rafa.

There were other tennis players who came close to interrupt the great Federer – Nadal era, Andy Roddick, Marat Safin, and Juan Martin del Potro were a few but they didn’t cause much damage.

This year however, Novak Djokovic seems to be making his way into the two of them, and neither of them, Rafa specially, knows how to stop him.

Djokovic 2011 winning streak started at the Australian open, where he defeated Andy Murray to win his second Australian Open title, and it ended at the French Open losing to Roger Federer in semi-finals. During that winning streak he won 41 consecutively matches until the French Open. He was however able to come back from that defeat and win Wimbledon by defeating the former title holder Rafael Nadal and taking the number one spot away from him.

Against Federer, Djokovic also holds the lead.  They have faced each other four times and only once has Federer been able to defeat Djokovic. But that was all in past years when Federer and Nadal nominated the game, but this year Djokovic is the one holding all of the cards.

In a few weeks, the last Grand Slam, the U.S. Open, will begin. Many critics and tennis analyst have already made their predictions of who will make it to the final match and who will win this prestigious title. The odds do not favor Nadal or Federer.

Although Nadal is the title holder, his past performances at the U.S. Open does not help him, and if he does end up reaching the final he would have to face Djokovic, a man he has not been able to defeat this entire year.

Federer has it tougher but not because of his age like many critics have been saying, but because he would have to go through Nadal first then Djokovic. Let’s also not forget that he has only won one tournament this year and it was not a major tournament.

Novak Djokovic is the top contender to win the U.S. Open, he’s the guy to beat; and it is because of him that this year will go down in history to be the end of the Federer – Nadal tennis domination 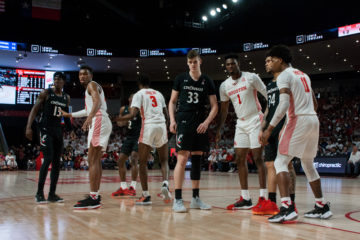