The MMA world has been shaken up by UFC President Dana White’s announcement of a match between Brock Lesnar and Alistair Overeem at UFC 141 December 30th in Las Vegas. Not only will the winner of this bout face the winner of the Cain Velasquez vs. Junior dos Santos fight, but it’s also sure to be an exciting fight as both men have something to prove.

Overeem was considered one of Strikeforce’s biggest and brightest stars, but was surprisingly released with one fight left on his contract in late July. Not only was his release shocking, but it was also tagged untimely by some as he was let go in the middle of the promotion’s Heavyweight Grand Prix tournament. Sherdog.com has ranked Overeem as the #3 heavyweight in the world. The UFC’s timing was anything but inopportune, as it managed to sign him on September 6th.

Although Overeem impressively held the Strikeforce and K-1 kickboxing Heavyweight Grand Prix titles at the same time, some observers question whether he can hang with the world’s best fighters in the UFC. Overeem wants to prove his skeptics wrong; fighting former UFC Heavyweight Champion Brock Lesnar is a good first step. In his MMA career, Overeem has compiled a record of 35-11-0 (1 no contest). With 14 of his wins coming via TKO/ KO, it’s no secret that he can strike. It will be interesting to see how he plans on doing that against one of the of the UFC’s heaviest hitters in Brock Lesnar.

Brock Lesnar’s health has been an issue, causing him to withdraw from fights and even vacate the UFC Heavyweight title. His most recent battle with diverticulitis looked to have him sidelined for quite some time, as he had surgery to remove 12 inches of his colon on May 27th. Back from a rather speedy recovery, Lesnar is eager to pick up right where he left off, in contention for the heavyweight title. After Cain Velasquez left him a bloody mess and took his title, Lesnar is not only looking to win, but also make a statement.

Lesnar doesn’t have a lengthy resume 5-2-0, but he’s made a name for himself by defeating the likes of Heath Herring, Frank Mir and all-time great Randy Couture. Look for Lesnar to come in on Overeem early and often with strikes and possibly takedowns. Although he is overpowering from top position, he needs to be careful with Overeem, as 19 of his victories have come via submission. Brock Lesnar’s first loss was to Frank Mir in 2008. In that fight, a novice Lesnar was caught in a trap and lost by submission in a round many thought he was winning.

This fight already has the MMA world buzzing. It should be one of the biggest draws of the year. Aside from the experience edge going to Overeem, this should be a fairly even fight. No matter the outcome, it promises to be an exciting fight as both of these men push for a title shot. One thing’s for sure: on December 30th, the UFC is ending this year with a bang. 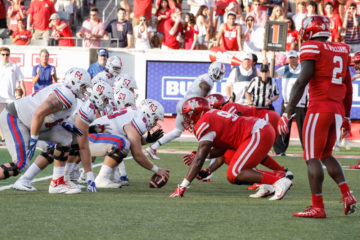