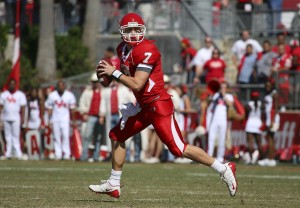 In their last two games the Houston Cougars struggled to kick start the offense in the first half.

wasn’t the case Saturday as Houston QB Case Keenum and the Cougars unloaded 35 first half points on the Georgia State Panthers.  The Cougars cruised to an easy shutout with a 56 – 0 home win  to stay undefeated after four games.

On the Cougars first drive Case Keenum connected a post pass to WR Justin Johnson for an 18 yard touchdown.  Johnson finished the game with 6 rec, 83 yards, and two TDs.

Two drives later Keenum connected with WR Tyron Carrier on a six yard screen pass. Carrier who finished with 5 rec and 90 yards, has now caught a pass in 43 consecutive games. He leads the nation in the category.

The Cougars then went up by 14 when Houston RB Bryce Beall who finished the game with 7 carries, 64 yards, and two TD’s rushed up the middle for a 3 yard TD.

At the end of the first quarter the Cougars led 21-0, displaying a true fire drill offense.

Georgia State didn’t have enough offensive weapons to punch a hole through the Cougar’s defense. After allowing more than 23 points in each of their first three games, the Cougars defense blanked the Panthers offense.

The Panthers punted on their first seven drives and QB Drew Little threw for only 117 yards and one interception.

The scoring continued for the Cougars in the second quarter, after another Georgia State punt.

Michael Hayes, who had 9 carries, 58 yards, and a score, rushed over the right tackle for 2 yard TD making the game 28-0. At half time the game was secure as the Cougars were up 35-0.

Keenum was taken out of the game early in the third quarter, he finished the game completing 29 of 34 passes, 415 yards, and 2 TDs. After that it was just a matter of running out the clock for UH.

Back up QB Cotton Turner would take over for Houston.  The Cougars would go on to score three more times in the second half with Turner at the helm.

The Cougars now play (2-2) C-USA rival UTEP Miners next Saturday at Sun Bowl Stadium who are coming off a 52-24 loss to #18 South Florida. 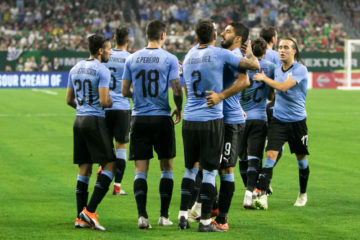