The Houston Cougars scored three fourth-quarter touchdowns Saturday night against the Louisiana Tech Bulldogs, as they completed a shocking come from behind win (35-34) at Joe Aillet Stadium. The Cougars are now 3-0 and undefeated for the first time since 2009.  UH QB Case Keenum proved he can rally his team back from a big deficit.

The Cougars trailed for most of the game, but outscored the Bulldogs 21-0 in the fourth quarter to take a one point victory back home.   UH has scored more than 30 points in each of their first three games showing they have fire power to propel QB Case Keenum into the record books.

Louisiana Tech and North Texas kept the past two games close because the UH defense has underperformed in the first three games allowing a combined 91 points. The defense has to get better if the Cougars want to win the rest of the games on the schedule this season.

Keenum lead the way throwing for 351 yards, three TD’s and two interceptions. Patrick Edwards only caught three passes for 81 yards, but had the two most important second half completions with two catches being TDs. Justin Johnson added 100 yards on five catches.

The Bulldogs were up 34-7 with five minutes to go in the third, however, turnovers proved costly for the Bulldogs as 17 year old QB Nick Isham and running back Ray Holley both turned the ball over late in the fourth quarter.  The Bulldogs then where unable to convert a crucial fourth down late in the fourth, which saw Houston take their first lead of the game a few plays later.

Houston began its rally when Edwards caught a 50 yard pass from Keenum to narrow the lead 34-14. RB Bryce Beal then added two rush TDs, a four and a two yard run respectably to close the gap to six points.

Once again, Edwards came to the rescue leaping over a defender and was just able to place one foot inside the end zone for a 32 yard pass completion from Keenum to take the lead by one.

As good as a win sounds, the Cougars continue to lack in first half efficiency.  They have only scored once in the first and second quarters compared with four scores in the third and fourth.

The Cougars punted on four out of their first five drives, and finally scored their first points of the game on the sixth drive.

With this win Houston may see itself fall into the Associated Press or USA Today Top 25 poll, or come close.

Keenum’s Heisman hopes live to fight another week, after being close to sabotaging the season,  the Houston Cougars now return back home to face the Georgia State Panthers at Robinson Stadium next Saturday at 7 pm local time. 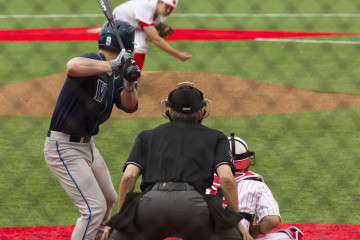