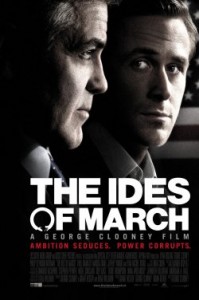 Two years ago, I was in a freshman level political science class when the professor said something that I remembered towards the end of The Ides of March. He told us impressionable students that we should never look towards candidates as moral leaders. His reasoning was that in order to achieve whatever office any idealist strives towards, he or she will need to make compromises, and in the process surely make mistakes that set them on a path other than the one they originally intended.

The Ides of March, directed by George Clooney from a screenplay on which he collaborated, examines this premise not solely in George Clooney’s Governor Mike Morris’change, but also on the more radical transformation of Ryan Goslin’s Stephen Meyers. Steve is a young idealist and the mastermind behind Governor Morris’ Democratic campaign, which is at a pivotal point in its primaries after Steve’s boss, Paul Zara (Philip Seymour Hoffman) fails to acquire the support of a senator whose support would guarantee Governor Morris the win and subsequently the entire general election.

Although this movie could have easily been a sequence of debates, regarding current hot button topics (Don’t get me wrong, there are a decent number of those) the script and Clooney decide to focus the drama squarely on Goslin whose character experiences a believable and alarmingly fast change through a series of compromises that begin with his philandering with Molly Stearns (Evan Rachel Wood), a feisty twenty year-old intern working on the campaign, and a meeting with the opposition’s manager Tom Duffy, played with the right degree of sliminess and empathy by Paul Giamatti. These two decisions lead Steve to numerous moments where the high road means losing everything he has worked up to and the low road means compromising in a way he never imagined. To say more than that about the plot would kill it, but in the end it provides one of the best origin stories for a villain that’s never been in a comic book.

All around, the performances are fantastic, especially from Gosling and Wood, who prove to have a playful chemistry in early scenes that make later parts of the movie tragic in a manner that is rarely over the top. Hoffman, Giamatti and Clooney play their roles solidly with each respectively doing his smart but stern, scummy but nice, and charming but conniving parts with ease. It’s difficult to praise Gosling for this without seemingly jumping onto his bandwagon, but I’m going to ahead and jump in anyway. When Giammati’s Duffy tells Steve that they need to start being “tougher and meaner” like the Republicans, it’s difficult to conceive that the ever-smirking Gosling would pull off a master class in both under severe pressure from all sides. Kudos also need to go out to the cinematographer, Phedon Papamichael, who uses extreme close-ups to get us right with Steve as he makes decisions that will intrinsically change him in an unforeseeable way. The beginning and end are great lessons in narrative, having Gosling in much the same sort of location but under very different circumstances.

The Ides of March is a political drama done right. It favors human drama in place of quick edits and heavy exposition that have mired the genre lately and is filled with performances that are never hammy, a marvel for the hit-or-miss Hoffman and Giamatti. Although by no means a masterpiece (a few more scenes could have been left on the cutting room floor) Clooney proves adept at putting the camera where it’s most effective and adding another problem to the characters’ loads whenever the tension is about to let up. See this movie if you want to understand why candidates often fail us and why we forget that they and their supporters are just normal people often willing to make a compromise for the win.

Is 'The Lion King' Anti-Latino? 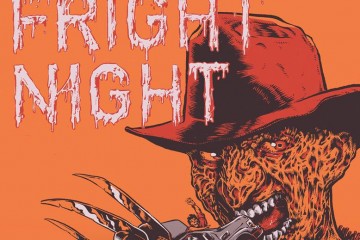