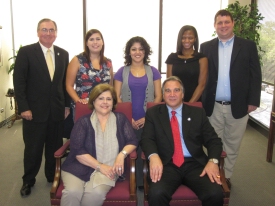 “This is an outstanding example of how generous alumni and contributors can make a difference in the lives of students who might otherwise be unable to pursue their degrees,” says UH-Clear Lake Associate Vice President for University Advancement Dion McInnis.

In her personal statement for applying for the scholarship, McKenney writes that as an unwed mother who had been verbally and mentally abused by her boyfriend, she finally found the strength to leave once she found out she was pregnant with her daughter. After receiving her degree in psychology before going on to a graduate program in family therapy, she writes, “I would love to eventually one day open a shelter for battered women and help them through one of the most difficult times of their lives.”

For the past 20 years, Furman has worked full time as a paralegal/legal assistant at various law firms and currently works in the litigation department of an international oil and gas company. She plans to complete her business degree in spring 2012 after several setbacks that have included a hurricane and deaths in her family. She writes, “By completing my degree, I will not only accomplish a lifelong goal and set a good example for my stepchildren, but I will give myself every advantage to succeed in life.”

Finally, graduate student and Staff Sergeant Ambericent Cornett joined the service after high school and served in Iraq and Kuwait as well as stateside. She continues to serve in the U.S. Army and says she would like to further her career in the military as an officer. Cornett holds a bachelor’s degree in biological sciences and is currently pursuing a Master of Science in Biological Sciences with a premedical concentration from UH-Clear Lake, as well as an online graduate degree from another university. She writes, “I chose to pursue a career as a medical officer for two reasons: the first was to serve my country and hopefully make a strong impact on the lives of the soldiers I serve, and second to show my brother that he does in fact have a family member he can be proud of.”

Three of the four recipients met the Landolts during a small reception held with McInnis and UH-Clear Lake President William A. Staples. Both Ann Wismer-Landolt and Michael Landolt expressed their happiness at being able to assist these four students and were impressed with all of their hard work while overcoming so many obstacles. The two community and business leaders created the M.L. Wismer Scholarship Endowment in 1993, the university’s first private scholarship, to honor Ann’s father, M.L. Wismer, as well as to aid students in attaining their chosen educational goals. The couple has helped establish three other endowments.

“The Landolts are very supportive of UH-Clear Lake and its students,” says McInnis. “Their passion for the university and their generous personalities are apparent when they meet the scholarship recipients.”

Michael Landolt, a local certified public accountant, serves as a senior financial adviser for Merrill Lynch. He is a recipient of a 2008 Distinguished Alumni Award, the 2005 UH-Clear Lake Community Partnership Award and the 2000 President’s Cabinet Leadership Award. Ann Wismer-Landolt remains very active in the community. She serves on the advisory board for the Lunar Rendezvous Festival, as well as the board of directors for the Boys & Girls Harbor. She is a 1993 recipient of the UH-Clear Lake Distinguished Alumni Award.

Father and son exhibit started as book of poetry and photos 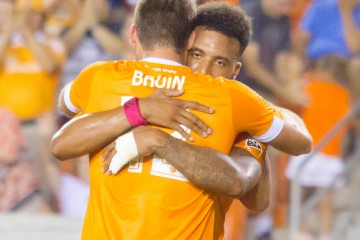