Remember 2009’s Calhoun Lofts debate? You will recall our university’s stance: constructing Calhoun Lofts would serve an influx of students aching to live on campus. Opposers contested – correctly, we now see – that the lofts were an exorbitant expense, that not only would the lofts be partially occupied, but the building property would better serve the campus as a parking lot.

The university went ahead and constructed the multi-million-dollar lofts.

I use the Calhoun Lofts debate to segue into a larger problem: UH’s blindness to the fact that it is a commuter school.  As long as the cost of on-campus living overshadows the cost of commuting, UH will remain this way.

Recall how the Calhoun Lofts were originally built only for graduate students were finally just made available to undergraduates. While they have served some students, the Calhoun Lofts have burdened UH’s overwhelming majority – commuters.

Indeed, our university lives hypocritically: it complains about the lack of on-campus residents but survives on commuter money.

As a third-year student here, I can say with authority that campus crowdedness has never been worse.

You see it everywhere – parking lots, shuttles, eating spaces, computer labs. While this means that, yes, UH has become an in-demand university, it signifies a terrible truth: it is stuffed beyond capacity – beyond capability. Our campus was simply not designed to hold this many people. UH can build, rebuild and renovate all it wants, but our space remains finite.

Sadly, this is not what people like a university president want to hear. The president would rather hear about expansion and record enrollments, as if these things alone signify an “elite” university.

Rather, what makes a university “elite” is its attentiveness to its students, its efforts to make their college experiences as rich and stress-free as possible. The logic is simple: the more students you have, the less attention you can give to individuals.

The university refuses to consider the disastrous effects that parking, food lines and crowded computer labs have on our in-class performance.

This all begs the pivotal question: “Why would our amazing university allow itself to over-enroll, to over-expand, to over-populate?”  Money.

Unfortunately, for us students, the solution to our problem of over-population – lowering the enrollment cap – is not revenue-friendly. The university has clearly decided that our daily hardships mean little compared to higher revenue.

Compare the enrollment differences between UH and the “public ivies” that it tries so hard to emulate: North Carolina – Chapel Hill, Virginia, Berkeley, et al.

What President Khator and regents remain blind to is that UH’s essence is both incompatible and incomparable to a public ivy’s. Besides being residential campuses, public ivies do not allow themselves to balloon to UH’s size. Public ivies know that, in the end, this hurts their students. Accordingly, they put their students above their revenue.

It is not too late for UH to roll back its enrollment cap to a more practical number. This would be great for multiple reasons: [1] smaller class sizes will result in stronger student performance – because of more individual attention; [2] students will  have more time to be students – that is, more time to study instead of dealing with the delays of over-population; [3] since students will not have to plan on arriving early for parking, they’ll be able to study and rest more on the nights before classes, which will result in better attentiveness and performance; [4] and of course, a lower cap on enrollment would raise the quality of students admitted to UH.

These are only some tangible benefits. Reform is still possible. Until then, UH’s belly grows fatter and fatter – and the belt is about to pop.

Edward Garza is third-year English student at the University of Houston – Main campus. Want to voice your opinion? Email editorinchief@uhelgato.com with your OP/ED. 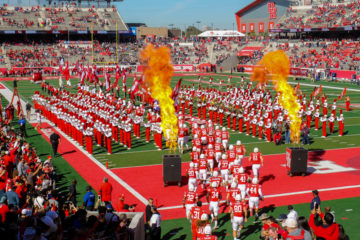