In 2005 comedian Dave Chappelle began to make himself scarce in television and eventually discontinued his thriving partnership with Comedy Central in favor of a life far removed from fame.

When asked why he chose to give up his multi-million dollar career, he said, “I felt like some kind of prostitute or something. If I feel so bad, why keep on showing up to this place? I’m going to Africa. The hardest thing to do is to be true to yourself, especially when everybody is watching.”

Six years later, as Republican hopefuls jockey for lead position to be their party’s presidential candidate, Chappelle’s words prove as true as ever. Romney, Perry, Bachmann, Gingrich and other primary candidates, despite their disagreements on side-line issues, all have something in common: their race.

The only candidate in the bunch that breaks the racial mold is the former CEO of Godfather’s Pizza and resident African-American Herman Cain.

A stranger to many worlds, he is one of the few black CEOs, an author of a best-selling autobiography, and, of course, a presidential front-runner whose goal is to fix everything that the Democrats broke.

However, in accordance with the current behavior of the more radical set of the Republican Party, he opposes high taxes for the rich, sees abortion as morally wrong and is tough on immigration.

The classic Republican, through and through, Cain lacks only the racial credentials to complete his resume.

Instead of seeing this as a weakness, he classifies it as one of his greatest strengths.

On CNN’s The Situation Room, Cain said, “I believe a third [of African-Americans] would vote for me, based on my own anecdotal feedback. Not vote for me because I’m black but because of my policies.”

However, in 2008, the percentage of African-Americans that voted for Obama was 95 to 96 percent.

In consideration of the long-standing correlation between blacks and Democratic voting, Cain said, “African-Americans have been brainwashed into not being open minded, not even considering a conservative point of view.”

Cain’s foot-in-mouth syndrome didn’t stop with the attack on black liberals but rather continued to target the American people as a whole and Muslims.

Mandarins, watch out. You could be next.

All things considered, there is a certain feeling of familiarity that rises inside me when I get the lucky chance to hear Cain spew at the mouth.

It’s the kind of déjà vu that you feel after watching an extremely graphic horror movie, and then going to war.

After a week or so of thought, I realized that I had indeed seen Cain before in the form of a Dave Chappelle skit in which Chappelle played a blind black man by the name of Clayton Bigsby who, at birth, had been told that he was white.

Bigsby lived a rather successful life as a popular white supremacist author until it was revealed to his fans that he was, indeed, black.

As comical as the skit may have been, acts like it led to Chappelle’s exit from show business. He felt that he wasn’t being true to himself, and he let go of his well-paying gig in favor of getting back to his roots and rediscovering who he was as a person.

Cain said in his book that it wasn’t “prudent” for him to be active in the civil rights struggles of the 1960s. If he can’t do these things, then maybe he should take another hint from Chappelle… and disappear. 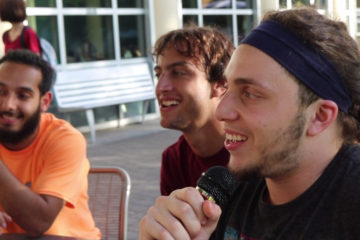