Three interactive video games developed by UH computer science students have been selected by Microsoft to compete in the U.S. Imagine Cup 2012 Finals this spring, dominating the slots awarded in the fall leg of the contest.

“Microsoft picks only six teams in the fall finalist selection, so UH is dominating the finals again,” said Chang Yun, research assistant professor in the department of computer science. “These teams have worked hard. For the first round of the competition, they had to submit a storyboard, and for the second, they submitted a game demo, instructions and a playable game. Now, they will continue to refine and improve their games for the final round of the competition.”

The students are part of the Interactive Game Development Program in the computer science department. Yun and Jose Baez-Franceschi, a game developing instructor, are the teams’ mentors.

Team Wasabi Ninja created a game for Windows Phone 7, where the player takes the role of a nanomachine engineered specifically to destroy harmful materials in the water systems of developing countries. Members are graduate students Martin Le and Patipol Paripoonnanonda and undergraduates Jackchalat Chaiyakhom and Josh Riffel.

The group coached by Baez-Franceschi, Team Eager Beavers PC, created an educational game dubbed Hydrobot Adventures, featuring a robot capable of restoring all ocean life destroyed by years of pollution. During the game, the player learns about environmental sustainability, and the game brings to mind a vision of what the ocean environment will become in the future if people do not act now. Members are undergraduate Khoa Le and graduate students Hien Nguyen, Sushil Joshi and Debjyoti Majunder.

The finals will be held this April in Seattle. With six more finalist teams to be picked during a spring selection in March, additional UH teams may advance to the national finals. Teams also can enter the Worldwide Imagine Cup for a chance to make it to the international finals in Sydney, Australia, later in the year.

Ride Rumblings: How to change a flat tire without a man 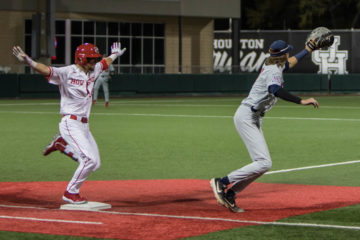