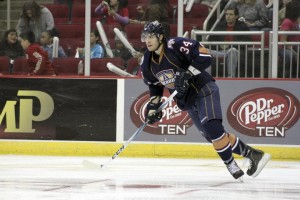 After coming home with a 6-1 win against the San Antonio Rampage, the Houston Aeros lost 2-1 to the Oklahoma City Barons in a shootout on Thursday afternoon.

Despite holding off 34 shots on goal, Aeros goalie Darcy Kuemper faltered against center Josh Green for the winning shootout goal. Kuemper made a strong showing in his home season debut on goal despite the loss.

“We’re very spoiled here with our goaltender. He works hard and wants to start every game. He doesn’t want to get scored on and that’s what you want,” said John Torchetti, Aeros’ head coach. “He’s a bigger goalie and takes up a lot of the net, but he’s really detailed.”

The teams were evenly matched throughout the first period with both teams ending the first with 10 shots on goal and tied at zero. However, the Barons began to place pressure on the Aeros’ defense by pulling their goalie within the first two minutes of the game hoping to score on a power play.

Despite being previously ranked first in the western division, the Aeros came into the game at an offensive disadvantage with right wing Jed Ortmeyer and centers Jeff Taffe and David MacIntyre being out for injuries.

“Bottom line is that our defensemen have to get the puck to the net. It doesn’t matter who’s in the line up,” said Torchetti.

The Aeros defense was able hold off the Barons until the second period with a goal by defenseman Alex Plante on a power play.

The Barons lead the game despite the multiple scoring opportunities for the Aeros on power plays. The Aeros was unable to score on six power plays, which added to on the Barons’ penalty kill average of 84.8 percent.

We have to do a better job and our power play has to improve.”

The Aeros was able to push the game into overtime with a tip-in goal by right wing Jared Palmer in the last two minutes of regular game play.

The Myth of Taíno survival in the Spanish speaking Caribbean