It’s never too early to be thinking of Christmas and the attendant celebration that focuses on “Peace on Earth, goodwill towards men.” But it’s always timely to share with those around you the many contributions made to our nation’s cultural, economic and social mainstream by native-born and immigrant Latinos – especially during the holiday season that is supposed to focus on compassion and friendship.

Each year, the celebration that begins with Thanksgiving Day and runs through New Year’s Day is a time for counting our blessings, demonstrating our love and humanity towards one another, praying for world peace, and putting an end to the inhumanities visited upon our fellow human beings. These are times for reflection and the search for spiritual peace.

However, in recent years immigration has reflected less than positive sentiments among many of our fellow U.S. Americans. There are those who cite the growing negative influence Latinos are having on “their” society, “their” economy and “their” culture. These attitudes prompt me to share the many contributions Latinos are making to our nation’s economic, social and cultural evolution.

In addition to low cost labor, we have imported many things from Latin America throughout the history of our young nation. One of them has come to symbolize the holiday season we celebrate each year: the cuetlaxochitl (kweh * tlah * SOH * cheel)- a plant native to Mexico, Central America and the modern U.S. Southwest. To many, it is seen only in its foil-wrapped, potted state in late Fall as it trumpets the onset of the holidays, but in its natural state it grows up to 10 feet tall.

This icon of the holiday season was once part of the botanical gardens that existed throughout the pre-Colombian Aztec Empire. In that era, flowers and plants were cultivated for their beauty, as well as for medicinal and aesthetic purposes. The Mechicas (whose culture is the foundation of the Aztec civilization) used the cuetlaxochitl to cure fevers and to dye clothing and artifacts.

Today, as a result of Spanish influence and Christian teachings, most Latinos know the plant as the flor de la nochebuena (flower of the Holy Night). This is because it leaves turn into a flame-red color during the Christmas season.

In the United States, this Mexican native has a different history and name; here its history began with Joel Robert Poinsett, the U.S. Ambassador to Mexico in the 1820s. He reportedly visited a church while in Mexico in which the parishioners had adorned the Nativity scene with local exotic red plants that produced a very elegant and uncommon appearance. The Ambassador was so impressed with its foliage that he had cuttings of the plant transported across the border to his South Carolina hothouses, from which he commercially introduced the Mexican transplant to U.S. retailers and consumers. 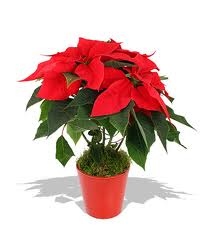 The poinsettia has become one of the most recognized icons of the holiday season in the USA. Yet, the cuetlaxochitl is still associated with Christmas throughout Mexico and Latin America – as well as in a substantial number of Latino homes throughout the United States. Who could have imagined that a shrubby, pre-Colombian plant with reddish leaves (that really aren’t flowers) would someday become the second most popular colorful plant sold in the entire country, trailing only the rose?

The avocado (aguacate), chile pepper (chile), chocolate (chocolate), corn (maíze), peanut (cacahuate), potato (papa), tomato (tomate), along with the ubiquitous taco, tequila and tortilla – are among the many other imports from Latin America that have been readily adopted by a substantial number of U.S. households as a way of enriching the quality of their lives. If such indigenous transplants can be so easily welcomed and adopted by U.S. Americans, why are we (as several recently enacted state laws clearly demonstrate) so adamantly opposed to allowing the people who discovered, cultivated and refined many of these valued resources to contribute to our nation’s bounty?

As we begin to countdown the shopping days left before Christmas, let’s think about the real meaning of the holiday season and what it is we should be celebrating. When you look at the assortment of poinsettias with which you decorate your homes during the holidays, remember they are one of many transplants that are enhancing the quality of our lives.

True, Latinos did not cross the Atlantic Ocean on seafaring vessels; their ancestors were residents of the modern North American continent long before the British set foot on it. True, they did not design the political and social systems of the USA, but they – like many of the natural transplants from their respective motherlands – have contributed to the health, wealth and cultural evolution of this great nation.

On behalf of the 44 million native-born and naturalized U.S. Latino citizens – and the estimated 10-to-12 million undocumented immigrants – we extend to you a ¡Feliz navidad y prospero año nuevo!

Jim Estrada is the founder of Estrada Communications Group of Austin, TX. The former TV journalist and corporate executive is an expert in marketing and public relations. He attended San Diego State University, Boston College, and The Harvard School of Business and currently serves on the board of the American Association of Hispanics in Higher Education, the Advisory Council of the University of Texas Libraries and co-chairs development efforts for the VOCES Oral History Project, a project of the UT School of Journalism. His complete collections of essays can be read at: http://jimestrada.posterous.com. He can be contacted at jim@estradausa.com.