July 18, 2021 Francisco Casillas
Home»News»Barbie is shelved for ‘taking over the souls of youngsters’
News

Barbie is shelved for ‘taking over the souls of youngsters’ 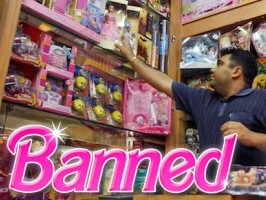 The conservative website Mashregh reported this week that the police has recently instructed toy stores in Iran to take Barbie dolls off the shelves and released an announcement that they can no longer be sold. As a result of the new instructions, some of Tehran’s large toy stores have started removing Barbie dolls and stopped selling them.

In recent years Barbie has drawn widespread resistance from clerics and conservative quarters in Iran, which consider it a symbol of the corrupt, immoral Western culture.

Several months ago a conservative website criticized the Iranian authorities for not taking the necessary measures to stop the use of Barbie’s image on such children’s items as schoolbags, stationery, clothes, and watches. The website claimed that the doll is “taking over the souls of the youngsters” and that the authorities need to collaborate with local manufacturers to encourage the use of Iranian and Islamic characters instead of Barbie.

In an attempt to deal with the growing influence of Barbie and her partner Ken on Iran’s younger generation, several years ago the dolls Dara and Sara were introduced as an original Iranian substitute.

The design and distribution of the dolls, a modestly-dressed brother and sister pair, was aimed to promote traditional Islamic and Iranian values and better cope with the market penetration of American dolls. It soon became clear, however, that the Iranian dolls could not capture the hearts of Iran’s children, and Barbie continued dominating the country’s toy market.

As part of the growing criticism of Barbie’s harmful influence on the consumption culture of young Iranians, the Gerdab website argued this week that the purchase of Barbie dolls triggers a psychological change in children and increases the influence of values that go against the values of Iranian-Islamic culture. The website reported that toy stores no longer sell just Barbie dolls and have also started offering harmful Chinese-made make-up for children due to the influence of the make-up wearing American dolls.

Barbie is shelved for ‘taking over the souls of youngsters’