Case Keenum ended his record-breaking college career in dramatic fashion throwing for 532 yards and three touchdowns, as the No. 19 Houston Cougars beat the No. 22 Penn State Nittany Lions 30-14 in the TicketCity Bowl.

The Cougars closed their season in front of 46,817 fans in attendance at the historic Cotton Bowl Stadium.

Keenum broke the NCAA record for most passing yards in a quarter with 227 in the first quarter.  He also broke seven Cotton Bowl passing records: passing (532), attempts (69), completions (45) and total offense (542 yards). Each record ranks in the top five in NCAA bowl history.

In its 21st bowl game appearance in school history, Houston avenged its only loss of the year to Southern Miss in last month’s Conference USA Championship game. 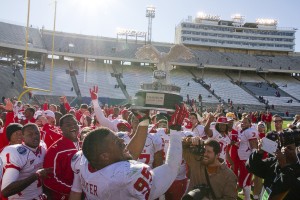 “The way our entire football team prepared leading up to this game, I think you saw kind of the fruits of their labor,” Levine said. “Our kids wanted to go out against a really, really tremendous opponent in a January bowl game on a national stage and show the country that our loss a month ago in the championship game was not the norm, that was a fluke, not the 12 wins leading up to it.”

Houston had 600 total offensive yards for the game and allowed only 137 passing yards and 169 rushing yards.

“I think kind of before the game, we knew we were going to throw the ball a bunch and talked about breaking records,” Keenum said. “We executed when we needed to.  Just goes to show how good a football team we are because Penn State is a good football team.”

Houston is the first FBS team to gain more than 8,000 yards in a season.

Penn State ended its forgettable season with a sour taste in their mouths. Starting quarterback Matthew McGloin was out with a concussion and backup Rob Bolden couldn’t carry the load, throwing for only 137 yards on 7 for 26, with one touchdown and three interceptions.

“We were trying to survive the first quarter.  We didn’t survive it.  The other things, two big plays, we had them trapped in the first series in the scramble, he jumped up on us,” Penn St interim head coach Tom Bradley said.

“Two big plays after that, the long touchdown passes kind of put us in a bind.  We knew he was going to get his yards. Excellent passing attack. Obviously he got a lot of yards today.” 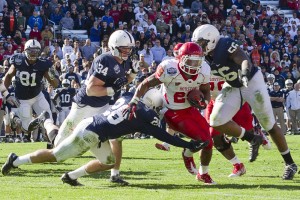 With this victory, Houston is hoping to put an end to its current bowl game skid, the Cougars had just one bowl game win since 1980. The Cougars defeated Air Force, 34-28 in the 2008 Armed Forces Bowl, but are now 2-9 in their last 11 bowl appearances.

The Cougars scored most of their points in the first half with 24, compared to only six second half points. However, the Cougars were able to hold Penn St to only one touchdown in each half.

Penn St had 5th-best pass defense in FBS coming into the TicketCity bowl at 162 yards per game. Keenum threw for more than double that in the first half alone. 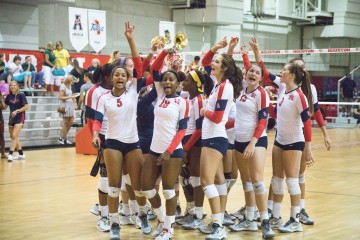