The Rockets skipped past the Portland Trail Blazers in overtime with a 107-105 victory Saturday night. This was the second consecutive victory and the first back-to-back sweep of the season.

“It was a dirty, ugly game. We just found a way to win,” Rockets head coach Kevin McHale said. “We did a good job of rebounding the ball against a really active team. Kyle (Lowry), Kevin (Martin), and Chase (Budinger) really stepped up big because we were having problems getting offense out of other places.”

Portland head coach Nate McMillan looks to build off this experience and take advantage of more opportunities down the stretch.

“We put ourselves in a position to win,” McMillan said. “We had to execute both ways and we had open looks and we just didn’t knock them down…we just didn’t make our opportunities.”

Lowry scored a season high 33 points and played 48 minutes, a feat that McHale doesn’t want to replicate this season. McHale admitted that he would like to play Lowry less, so he can rest, but he has found it challenging due to the play of the team without him.

“We have to be able to get that second unit a bit tighter,” McHale said. “I try to get them in sooner so they get adjusted to the game.”

After the game Lowry explained that he is willing to play every minute of every game if need be. He acknowledged that it’s not easy doing so but he looked forward to helping his team, especially tonight.

Luis Scola finished with 11 points and 10 rebounds. He felt that although McHale wants to limit his starters, he would like to play more.

“We’re playing good, we’re playing better and we won a tough game,” Luis Scola said. “It helps us as we prepare for Washington next week.”

The Rockets travel to the nation’s capital to face the Wizards on Monday night.  The next home game will be Tuesday night against the Detroit Pistons.

Latinos and the one-way road to the Iowa Caucuses: A fictional reimagining 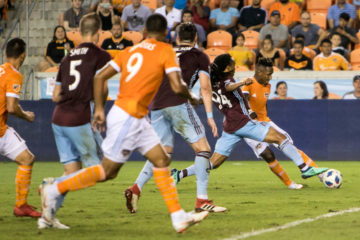