What would you think if I told you that quarterback Eli Manning will have more Super Bowl rings than his future QB Hall of Fame brother Peyton Manning?

Despite being in the NFL since 1998 and having a successful career that includes 11 Pro Bowls, five first-team All-Pro, four AP NFL MVP, fastest ever to reach 50,000 yards passing, and fastest to 4,000 completions Peyton Manning only has one NFL championship under his name.

Come Sunday afternoon, Eli Manning will have a chance to surpass his big brother Peyton in Super Bowl wins when he faces Tom Brady and the New England Patriots in the proclaimed rematch of 2007.

The New England Patriots are favorites to win Super Bowl 46 at Lucas Oil Stadium in Indianapolis by 2 ½ points, however, they find themselves as underdogs in the eyes of the fans to the surprising New York Giants.

Back in 2007 the Giants won three games on the road in the playoffs: defeating the Tampa Bay Buccaneers 24-14 in Wild Card week, Dallas Cowboys 21-17 in the Divisional round, and the Green Bay Packers 17-14 in the Conference Championship game 23–20 before upsetting the New England Patriots 17-14 in the Super Bowl.

The Giants surprised the entire world that day, handing the Patriots their only loss of the year, ending their hopes of a perfect season, and putting them short of the 1972 Dolphins (the only team to finish the season undefeated).

If the Patriots win, head coach Bill Belichick and starting quarter back Tom Brady will claim their fourth Super Bowl title and first since 2005, where they beat the Philadelphia Eagles 24-21.

The Patriots will make their seventh Super Bowl appearance and ranks third in most appearances, only behind the Pittsburgh Steelers and the Dallas Cowboys who are tied with eight apiece.

The New York Giants will become the first team in NFL history to win the Super Bowl with a 9-7 record in the regular season if they come away with the win.

One quarterback’s legacy will forever be changed. Whether Brady comes out a four-time Super Bowl champion or whether Manning comes out 2-0 against Brady in the Super Bowl, Sunday is set up to show us the best reality TV show of the year. 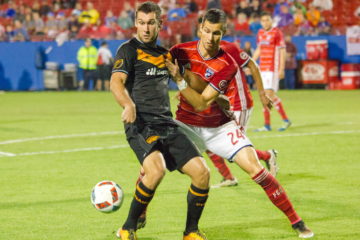