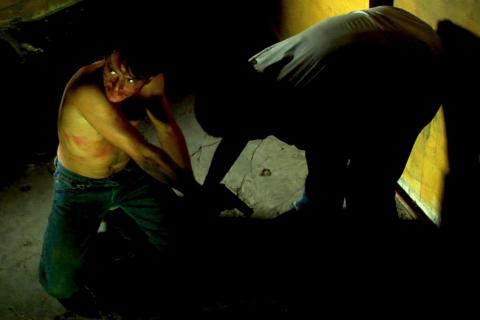 With so many people entering the film industry at a time when DSLR camera’s can often times be compared to that Hollywood cinematic quality, one can only expect individuals to rise from the obscure depths of independent film making and hope to produce a movie that engages the audience and pulls the viewer into a world created by that of the film maker. Unfortunately for Pompeya, this movie is not one of them.

The movie takes place in two different realities, the first being one where a director and his screenwriters are discussing the contents of a movie that they plan on filming and creating. The other reality is the frankinmovie the crew is piecing together, with anything they decide to implement in the script, happening in the second reality. While this is an interesting concept to try to portray on the big screen, the plot of the story seemed a little sporadic with “gansta” Argentinians making deals with Russian mob bosses and eventually having to fight Korean hit men that have a leader of their own who was in turn making deals with the Russian mob boss to get at the Argentinean “ganstas”. Right? What is this the UN? To add damage to this potentially success film, the movie was brought down by its lack of attention to detail and camcorder like focusing and image stabilization. In some parts of the movie you can see the camera man in the reflections and some scenes get no changes in camera angles. That isn’t to say it was all mistakes, one thing I do have to commend the makers of this film on is that they have their death and torture methods down to a T, which unfortunately hurt the film in that, it happened so much, it just got old. Stab, stab, stab.

The acting was not horrible but it wasn’t anything amazing. The people ranged from being terrible to actually quite decent. (Jose Luciano Gonzalez) My biggest problem was simply it did not engage me as a viewer because of the constant changing between reality one and reality two, destroying the momentum that either one was gaining to take us into the netherworld of indie film making.