MIB movie cars duke it out for Father’s Day 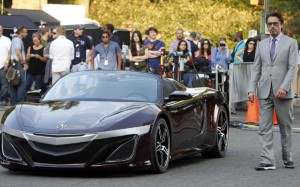 When Father’s Day rolls around, men come to one stark realization: we’ve utterly failed in our quest to get our abs beach body ready for the summer.  That’s why Hollywood invented the big budget summer blockbuster.  We need movies with lots of action, tons of special effects and bad acting to keep our minds off of our portion-controlled reality.  Two of the biggest movies this summer season, The Avengers and Men in Black 3, come not only with the above prerequisites, but they feature plenty of eye-popping candy. Ok, before I get a nasty-gram, I’m not talking about scrawny Hollywood starlets.  I’m talking four-wheeled lust machines!

The Avengers graced us with the sleek and sexy Acura NSX concept, an iconic supercar that was Tony Stark’s ride at the conclusion of the movie.  As long as I’ve been waiting for the legendary NSX to make a comeback, it was the classic vehicles of MIB that reminded me that summer is the time for untamed and unrefined freedom as gearheads and their sons pay homage to America’s car culture at motor shows and racing venues across the country.

Then I had an epiphany.  The kind that only red-blooded American males can have when watching Tommy Lee Jones and Will Smith chase around Boris the Animal through time.  Which MIB movie car would win in a drag race?  If Agent K and Agent J are going to save the earth from alien scum, they need a ride that can devour the 1320 in less time than it takes for a Prius to warm up its battery packs. 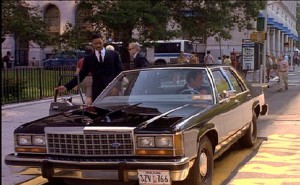 The Ford Crown Victoria is the standard issue vehicle of every police officer and government do-gooder.

There’s a reason why police forces across the country have made the Crown Vic the model of choice.  They can take a beating and have been battle-tested in the field for decades, but can it haul tail down the strip? In 1986, the Crown Vic weighed in at over 3600 lbs.  Portly, compared to today’s standard passenger cars, but strangely the lightest of all the MIB movie cars.  Thanks to emissions restrictions, the 5-liter V8 pumped out an underwhelming 150-hp and 270 lb-ft of torque. 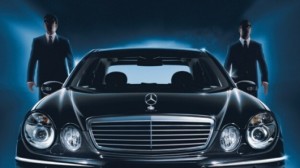 For the second installment of MIB, the agents  rode around in a Mercedes E class that just never fit well with the grizzled demeanor of Agent K. The Mercedes marketing blitz was meant to promote the 2002 re-design of the E-class which resembled more of a grocery-getter for the Coneheads than the super agent “hero car” Mercedes intended it to be. “In the film, the Mercedes-Benz E-Class stands for dynamic driving pleasure and innovative technology,” said J. Justus Schneider, Director of Marketing Communication at Mercedes-Benz Passenger Cars. With just over 300-hp on tap and 339 lb-ft of torque from a 5-liter V8, this boulevard cruiser may be quick, but with a weight of 3800-lbs it certainly isn’t agile.  MIB agents would be best served using the E500 for tributes to fallen agents and long trips to Florida. 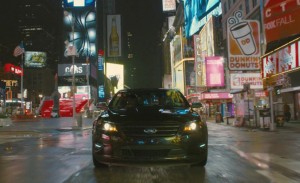 In order to capture the freshness of the first movie and get audiences to forget the regrettable MIB II, Ford was once again brought in to provide a vehicle that could hit warp speed without so much of a hiccup.

Despite being a massive 4,346-lbs, the Ford Taurus SHO launches like a Space X Dragon rocket thanks to all-wheel drive and a blown V6 with 365-hp and 350 lb-ft of torque. While it may not have the pedigree and caché of the German car, the Taurus is the perfect boulevard bruiser suitable for baggin’ baddies or speeding to the local diner for some pie.

For our Father’s Day bench race, the SHO is king of the quarter mile at a cost that will leave some spare change in dad’s pocket.

A new genre of music: Spanish with an English ‘swag’ to it

MIB movie cars duke it out for Father’s Day