The Houston Rockets officially announced Jeremy Lin on Thursday at a press conference.

“I’m excited to play here. I wouldn’t have signed an offer sheet if I wasn’t,” Lin said.

The current breakout player of the year officially became a Rocket at 11 o’clock on Tuesday night when the New York Knicks decided to not match Houston’s offer sheet.

When asked if coming from the Knicks to the Rockets was a downgrade, Lin stated he believed in this Houston team and he wouldn’t of came here if he didn’t believe so.

Leaving a star-studded team, the New York Knicks, with Carmelo Anthony and Amare Stoudemire, Lin will now be expected to be the star to the Clutch City team.

The Rockets cut Lin last year when he afterwards played with the Golden State Warriors before becoming the national phenom in the Big Apple.

“They were very apologetic about letting me go,” Lin said of the Rockets’ decision in the past.

Lin continued to say that Kevin McHale, Leslie Alexander and Daryl Morey made it clear to him the team is pursuing a big man and are looking to bring in talent to improve the team.

The All-Star break will be in Houston this upcoming season and the city hopes for Lin to be their representative during the star-packed weekend.

As for Lin, he is focused on winning and making the playoffs. That’s what this team is about, he said.

Lin cleared the air on his comments to Sports Illustrated saying he preferred New York. He said it was before free agency started, but when he heard about the Rockets, he was “excited.” He reiterated that if he wouldn’t of been excited, he wouldn’t have signed an offer sheet.

As for adding another star to the team, Morey stated the Rockets be one of the very few teams with the most cap space in the upcoming free agency and will be an aggressive pursuer. 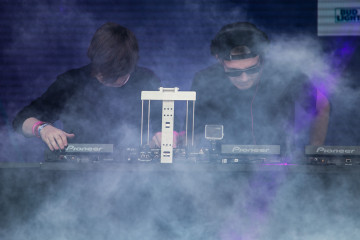