Two prominent members from the National Association of Hispanic Journalists are vying for the organization’s presidency that will be chosen by members today.

Russell Contreras, Associated Press reporter and financial officer for the NAHJ, and Hugo Balta, coordinating producer at ESPN, met with members at the UNITY conference in Las Vegas to discuss their plans for the organization.

“After two years on the board as financial officer and transforming our finances after being near bankruptcy, I thought I could step into presidency and take it to the next level with a number of my proposals,” Contreras said.

As the financial officer, Contreras wrote NAHJ’s austerity budget for 2011 that brought in more than $100,000 in revenue, bringing the organization back from near bankruptcy.

Contreras’ proposals include revamping the website, hosting regional conferences and affordable national conventions. He said he wants to bring conferences to places that he feels have been “long ignored” like New Mexico and Texas, instead of more popular destinations like Florida and the East Coast.

“We haven’t been to New Mexico in more than 20 years and that is the most Latino state in the country with affiliates and newspapers where we have a large number of Latinos,” Contreras said. “We need to go places where we are needed, not where we want to go.”

Hugo Balta, who ran against current president Michele Salcedo in 2010, said he was asked to run again by members that felt disenfranchised with the current leadership. A group of members started to petition and gather signatures to get Balta on the ballot.

“The board’s job is to represent the association, not to direct them with what this small group feels is the best foot forward,” Balta said. “I think Russell has shown that he believes his ideas are what’s best for the association as opposed to being inclusive and drawing from the well of experience and talent from the association.”

Balta believes it is crucial for the president and the board to improve their communication of what they debate on the table before any decision is made that would have a major impact on the association and its sponsors.

“It needs to be given through the website to the members so that they can digest what’s on the table,” Balta said. “They should have a finite period to be able to say, ‘Here’s how I feel about it.’ Again, support, criticisms and ideas.”
The polls close at 5 p.m. today and the new president will be announced at the NAHJ Gala at the UNITY convention. 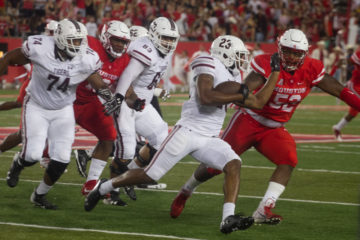