If there was any question as to whether UCLA had finally found a starting quarterback, there’s no need to worry.

With the ball at the UCLA 28-yard line, freshman QB Brett Hundley took his first snap and ran it 72 yards for a touchdown.

Hundley scored on his first collegiate snap. He even made a nice juke toward the end and got some timely blocking to ensure the six points.

On Hundley’s next two drives, he threw a pass for 36 yards and then threw an 11-yard touchdown.

Of course, he’s playing a Rice team that hasn’t won a season opener since 2008, but UCLA fans should be pretty pleased with Hundley’s start.

Johnathan Franklin rushed for 214 yards and three touchdowns as the UCLA Bruins racked up 348 yards on the ground route to a 49-24 win over the Rice Owls on Thursday night.

Rice’s Taylor McHargue threw for 172 yards and two touchdowns on 17 of 28 passing and rushed for 95 yards and a touchdown on 22 carries.

After Sheldon Price’s interception of McHargue, UCLA took three plays to go 47 yards and score on an 11-yard pass from Hundley to Jerry Johnson.

The PAT was blocked again to make it 12-0. Franklin took UCLA’s first snap on its next drive 74 yards to extend the Bruins’ lead to 19-0.

The Owls got on the board with a six-play, 75-yard drive capped by an 8-yard pass from McHargue to Luke Wilson to cut the lead to 19-7 with 6:08 remaining in the first and sliced the lead to nine on a Chris Boswell 53-yard field goal four minutes later.

After Rice recovered a Bruins’ fumbled punt return, the Owls trimmed the lead to 19-17 on a McHargue 1-yard touchdown run to begin the second quarter.

UCLA rebounded to extend the lead to 22-17 on a 27-yard field goal by Ka’imi Fairbaim with 9:17 remaining in the first half, and Franklin went 78 yards on the second play of UCLA’s next drive to up the UCLA lead to 29-17 3:36 before halftime.

The Owls answered with a 2-yard touchdown pass from McHargue to McGuffie 1:20 before the half to make it 29-24, but Damien Holmes returned Turner Peterson’s fumble 43 yards for a touchdown 17 seconds before the half to extend the Bruins’ lead to 35-24 after another blocked PAT.

After a scoreless third quarter, UCLA put the game away with a 3-yard touchdown pass from Hundley to Fauria to make it 41-24 after the two-point conversion failed with 12:29 left in the game.

Franklin extended the lead to 49-24 with a 22-yard touchdown run and Hundley connected with David Allen for the two-point conversion with 7:54 remaining in the fourth.

Sam McGuffie caught eight passes for 63 yards and a touchdown. Sam McGuffie and UCLA finished with 651 total yards in Jim Mora Jr.’s first game as coach, compared to 347 for Rice.

Matt Flora is a photography/digital media student and EGMN's 2014-2015 member of the year. His work can be seen on EGMN's sports website The Overtime Page and now also on The Venture. He enjoys tweeting sports scores and Crossfit exercising. His goal is to have his own professional photo website. 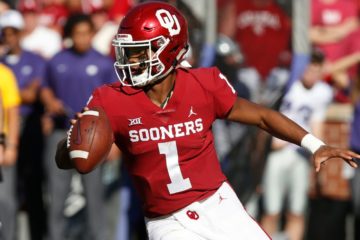