There is some fall off to be expected when a quarterback that holds every significant passing record finally graduates, more even when his top 4 targets go with him.

A sophomore quarterback in David Piland, multiple sophomore, and freshman receivers are leading this team.

And on Saturday night they faced a good program in LA Tech, a program that is expected to bust the BCS party this year.

Even when things looked like things were going to get out of hand early in the game, the Bulldogs led 14-0 only 5 minutes into the game.

They got it back to a one-point game at the half, and again had a shot at winning after getting down 3 touchdowns in the second half.

Even in a 56-49 loss to Louisiana Tech Saturday night the University of Houston Cougars gave their fans something to feel good about even if they don’t know it.

For the first time since Case Keenum came back for his sixth year, Robertson Stadium didn’t sell out after the Cougars discouraging loss to Texas State last week.

Most fans left the LA Tech game around the 3rd quarter, and most would agree that this team is no good, but they would be wrong.

His 77 passing attempts is a school record.

His 580 yards have set him at third all time for the single game record in school history and are most all time at Robertson.

His 53 completions without an interception broke the former record held by Case Keenum, and he is only a sophomore starting his 9th game.

The young receiving core had big drops and big time fumbles that led to Tech Touchdowns.

The team had 15 penalties for 138 yards and the defense had a hard time against Louisiana Tech’s no huddle, but Tony Levine’s team never allowed the game get to far out of reach and never stopped playing.

The Coogs even had a chance to get the ball back on an onside kick with 35 seconds remaining only to have an illegal touch penalty called that sealed the game.

All after Travis Bush assumed play-calling duties earlier this week when Mike Nesbitt resigned after the Cougars lowest scoring game in the past seven years.

Charles Sims had a total of 33 touches tripling the number of times he got the ball last game.

What Case did so well last year in spreading the ball, Piland did by getting the ball to 10 different receivers.

The special teams even had its hand in keeping the game close including a 77-yard punt from Richard Leone that only gained 57 after a touchback.

At the end of the night Coach Levine and crew can sleep easy in knowing that 3 things kept them from beating a good Louisiana Tech team.

Penalties, drops, and turnovers are what cost them the game, and that is something that all the Cougar faithful can take pride in when thinking about their young team.

Especially when you factor in that 80 percent of this team will be together for the next three years, and that they will be there for when the Cougars become a BCS team next year in the Big East. 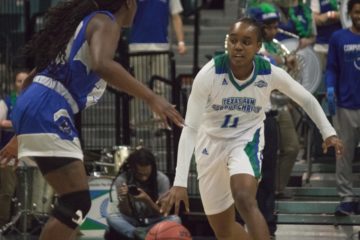