For those who have not picked up a comic book since Frederic Wertham published Seduction of the Innocent, let me give you a brief introduction to Bane. Bane first came on the scene in 1993 in an extended storyline called Knightfall.

At the conclusion of this story, Bane famously breaks Batman’s back forcing Bruce Wayne to retire. Batman would eventually recover, reclaim his mantle as the Dark Knight and beat the crap out of Bane.

The character of Bane has been depicted a number of times in both the cinema and television. Who can forget, although die-hard comic book fans would love to, his appearance in 1997’s Batman and Robin.

While Bane’s appearance in The Dark Knight was a disgrace (they took an articulate character and made him into a villainous Incredible Hulk), the character had better fortunes on the small screen. In “Batman: the Animated Series” it was stated outright that Bane was from Cuba.

In the newer television show “Young Justice”, Bane is voiced by none other than Danny Trejo of “Machete” fame. The score card thus far is television 2 – movies 0.

Many people complained that they could barely understand what the Bane was saying at all through that mask. I listened intently on how Bane spoke English hoping to hear a Spanish accent. No such luck. Having parents who speak English with an accent, I suppose has made my ears a bit more sharp to speech nuances, but even I had difficulty understanding one or two of Tom Hardy’s line. Blame the sound editor, not the actor.

On the subject of Tom Hardy … I have to admit I was one of those who cried foul when I learned that he had been cast in the role of Bane, I thought “Here we go again. Another non-Latino being cast as a Latino a la Al Pacino.”

Upon careful reading of his comic book origin, it turns out that while Bane was born and raised in Santa Prisca (a small island nation in the Spanish Caribbean that first appeared in the DC Comics series “The Question”), his biological father was a British mercenary.

Ok, malo mio. Maybe it is alright that Hardy played Bane after all … a Brit playing a Brit. My initial concern over casting was based in a history of changing ethnic characters in comic book and casting them with non-ethnics. To be fair, the reverse is also true. After all the only redeeming factor of that god-awful movie “Daredevil“ was Michael Clarke Duncan’s portrayal of the Kingpin (a black actor playing a white character from the comic books), and some of you may remember Billy Dee Williams as Harvey Dent in Tim Burton’s 1989 Batman film.

Why would one of the few noteworthy Latino characters in comic book lore be stripped of the very thing that distinguished him from the rest of the Batman rogue’s gallery … his ethnicity?

In an era of increasing Latino presence in comic books (Jaime Reyes as the Blue Beetle, Anya Corazon as Spider-girl, various members of the Ayala family as the White Tiger, and Rene Montoya as the Question among others), it saddens me to see how Christopher Nolan’s latest film treats Bane.

I understand ethnicity had no place in the story he was trying to tell, but this is perhaps my biggest gripe. By ignoring his ethnic heritage, Nolan also ignored the prominent presence of Latinos.

This happens all too often in the national dialogue of race and ethnicity as expressed through the melting pot metaphor. In becoming part of American society, ethnic people are forced to abandon what makes them distinct.

Some might argue that Nolan’s depiction of race is more progressive than other comic book movies: he has a Latino mayor and judge, and an African-American as police commissioner in the earlier Batman films.

In The Dark Knight Rises, Nolan missed an opportunity to have a Latino character in a prominent position. In an age when the Latino population of the United States is growing and the portrayals of Latinos in the popular media have become slightly more nuanced, I longed to see an articulate Latino antagonist that could best Batman not only with his fists but with his wits.

In the end, the depiction of Bane in the latest Batman movie left me wanting more.

Ariel Arnau teaches a course at Temple University called “Race and Poverty in the Americas.” He is most recentky the author of “The Evolution of Leadership within the Puerto Rican Community of Philadelphia” appearing in the Pennsylvania Magazine of History and Biography Vol.CXXXVI, No.1 (January 2012). He can be reached at furioso2@temple.edu.

Cougars’ Pollard and Dotson were double trouble for the Vaqueros 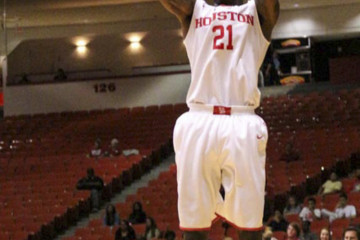