With all of the pressure to succeed in class and their social life, college students have turned to the drug Adderall to stay focused enough to get good grades.

“My focus has sharply achieved total undivided attention to whatever subject I desire,” said a premed student at the University of Houston who asked to remain anonymous. “Whether it is delusional or not, my desire to study and focus has increased, wanting to do so versus doing so is distinctive.”

While some students use this medication for academic purposes, the intended use of Adderall is to treat ADD or ADHD, a behavioral disorder characterized by the inability to pay attention, hyperactivity and impulsive actions.

Adderall, a combination of dextroamphetamine and amphetamine, is a central nervous system stimulant that affects chemicals in the brain and nerves that contribute to hyperactivity and impulse control.

For those who have ADD, Adderall helps them pay attention and sit still. When someone without ADD or ADHD uses Adderall, they experience an enhancement of their ability to concentrate on a specific task for an extended period of time and experience a greater sense of motivation.

A college student’s life consists of a heavy course load, low quantities of sleep, working part time to cover tuition and they are still expected to maintain a respectable GPA. Whenever a big test is coming up or a fifteen-page paper is due and an all-nighter is required, the use of Adderall has become necessary to those who wish to do it all, according to students who use the drug.

Students who are determined to overcome challenges they feel they could not overcome without the drug believe that the risks are nonexistent. For some users, it is only till afterwards that they realize the damaged caused by Adderall.

“My appetite has decreased not allowing me to eat my normal diet. It creates difficulty sleeping under the effects as well. Overall, it lowers fatigue and anxiety. My blood pressure increases a slight bit and induces me to urinate more, as is the diuretic effect of the medicine,“ the pre-med student said. “When I do exercises it allows me to push further than I would normally do so, occasionally it causes stomach cramps, but I have to say it creates the perfect studying environment.”

According to the Substance Abuse and Mental Health Services Administration, an estimated 6.4 percent of full time college students aged 18 to 22 use Adderall non-medically.

“Adderall increases your heart rate; it tends to make you very jittery, increases your blood presdsure and may cause a heart attack, insomnia and weight loss. You can develop dependence on it and abusive behavior may occur,” Francisco Rivera, a pharmacist working at Azteca pharmacy, said. “I think that this medication should be used under the supervision of a medical psychiatrist, whom is going to give them the supervision needed for this drug. I don’t think these students understand what they are getting themselves into.”

The Drug Enforcement Administration lists Adderall as a Schedule II controlled substance, falling under the same category as cocaine.

EGMN interviewed someone who admitted to selling Adderall to students and wishes to remain anonymous. He has been selling the prescription drugs for the past five months and since then reports that the demand for the drug has increased. The largest amount someone has paid him for the Adderall has been 100 dollars in a single transaction.

When asked why he was selling a prescribed drug to students he said, “I didn’t use it and it was easy money; it’s not as easy or as much as weed, but it’s still decent.”

Beside the side effects and the crime that is being committed, the morality of the issue also comes to mind. Some people believe that when someone uses Adderall, it is considered a form of cheating the system because the student’s peers whom did not consume the drug did not receive the benefits that came along with it.

“It works exactly like the same concept as steroids would enhance an athlete. So if that is cheating then so is this. It creates inequality for those who don’t take it,” said the pre-med student.

When a chemical engineering student at UH who also takes the drug illegally was asked the same question, his opinion differed.

“Nowhere in the student handbook does it say that taking Adderall is considered cheating,” he said.

The pressure to succeed will still drive students to risk their health. To some the price is worth the reward and they are not swayed to think otherwise.

“The worst case scenario presented in the warning label is sudden death, which in any case would not be worth anything unless in an attempt to rescue a life where risk is the only option. Yet again many warning labels also present the risk in order to insure themselves from lawsuits,” a chemical engineer student said. “The only side effect potentially able to contaminate my health is chemical dependency also known as addiction, so yes I will risk that in order to achieve my goal.” 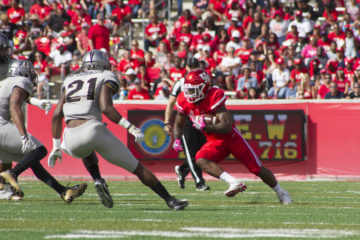