*A warning beforehand SPOILER alert. This article contains vast amounts of spoilers for the episode on November 18th, 2012*

An episode full of twists and surprises, this week’s episode of The Walking Dead left no rock unturned when it came to shedding light on multiple questions surrounding the season so far. The question of whether the Governor and Andrea would actually start seeing each other became true as they both finally revealed the feelings they had for each other. After going throughout the prison and coming across a walker with Carol’s knife in its neck, Daryl felt he found proof Carol was in fact dead.

But soon after opening a creaking door to initially kill what he thought was a walker, he found Carol lying against the wall of the room covered in blood, dirt and exhausted so he carried her to safety.

The biggest mystery cliffhanger from the episode was the mysteriously ringing phone Rick answered. Throughout the episode, Rick spoke to three different people with very important messages. The first caller was a woman who told him about a safe place where there is no infection and everyone is safe, but she was hesitant to tell him where after hearing Rick’s pleas for help.

The second caller was a man who kept asking how many people Rick has killed, and how his wife was killed. What was strange about this was Rick never said anything about his wife to the caller, so it is unclear to how he knew this. The third call was the same woman from before but this time, she said his name. Rick suddenly realized that he never said his name to any of the callers so, how did she know his name? And the third different and final caller explained possibly the biggest twist in the episode. As she talked, Rick noticed her voice sounded oddly familiar and he soon realized that it was Lori.

As we know from the episodes a few weeks prior, Lori died. She explained the callers Rick earlier talked to were Amy and Dale (two members of the group who in the earlier seasons died from walker attacks). The audience realizes that the phone calls may have been all a figment of Rick’s imagination. The word “may” is used because it all seemed too real, even Rick could not accept it. But real or not, Lori was able to motivate Rick to keep going and to live for his children now, especially his newborn daughter. Those words struck him and the audience was finally able to see Rick smile again and hold his newborn child for the very first time.

As a side note, the episode began with Merle and three other men from Woodbury searching for Michonne to make sure she never tried to return to Woodbury. Michonne was able to kill two of the men searching with Merle but she was shot and injured by Merle in the process.

Merle gave up searching for her and killed the third and final man he was out searching with because he refused to lie to The Governor that they killed Michonne when in fact she escaped. While Michonne was trying to escape, she saw two other survivors searching for food and baby formula in a nearby store (these two survivors were in fact Glenn and Maggie). But she did not make contact with them because soon after Merle showed up and was talking to Glenn and Maggie wondering where his brother was and if he was alive. If you are new to the series, the brother of Merle is Daryl.

After shooting at Glenn and holding Maggie hostage with a gun to her head, he forced Glenn to drive all of them back to Woodbury.

While all of this is happening, the injured Michonne overhears Glenn talk about the prison the rest of the group was located in a casual conversation with Maggie. At the very end of the episode when Rick is walking to the front gates of the prison, we see a limping Michonne holding onto the gate and gazing at Rick for help.

To be informed on the next episode recap or just to hear interesting news about The Walking Dead follow me @Breanna_C_ on Twitter!

‘The Walking Dead’ Recap: Season 3, Episode 5 “Say the Word” – What lies ahead has yet to come… 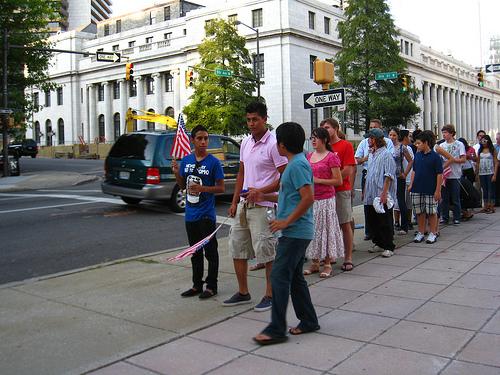