July 18, 2021 Francisco Casillas
Home»Features»From the other side of the ice: Reilly Smith, a two-league Star
Features/Sports

Even though he hasn’t completed his first AHL season yet, Reilly Smith is quickly moving through the Dallas Stars system.

The 21-year-old rookie left wing has been a solid figure on the Texas Stars roster by being second on the team in goals (11) and points (27) after 38 games.

But his most noticeable achievement to date has been his six games with the Dallas Stars this season. He played three games with Dallas in the 2011-12 season, but this time he met a lineup strengthened with the acquisition of NHL veterans, Jaromir Jagr and Ray Whitney.

“Every now and then you have to give your head a shake. It’s pretty surreal,” said Smith about playing with the 40-year-olds forwards.

“I remember growing up and watching those guys win the Stanley Cup. I think Jagr might have won a Stanley Cup before I was born. It’s pretty crazy, and a great experience,” he said.

Hours after seeing a 2-1 win by the Texas Stars over the Houston Aeros Friday night, Smith was recalled to Dallas when Whitney was placed on injured reserve for a foot injury.

Smith acknowledged his excitement of becoming pro but pointed out that he had an easier transition because of the number of Texas Stars on the Dallas roster.

“It actually helped a lot having some of the guys that I played with in the AHL at the start of the year,” he said. “It gives you familiarity with your line mates, and makes you more comfortable in jumping to the next level.”

He was primarily playing the fourth line with Texas teammate Cody Eakin and Ryan Garbutt.

Coming back from the NHL, Smith ended his six games with a plus-minus of -2 and a hooking penalty against the St. Louis Blues, which was a learning experience for the rookie.

“I kind of had to change my game a little bit when I jumped to the NHL. I try a simpler game, and I try to limit the mistakes because mistakes at that level turn back on you really quickly,” he said. “There are daily lessons that you pick up out there playing with the pros and guys you analyze.”

Friday’s game against the Aeros was Smith’s only game between call-ups, but he found the Texas Stars in good shape despite the shuffling of forwards Eakin, Tomas Vincour and Antoine Roussel, and defensemen Jordie Benn, Jamie Oleksiak and Brenden Dillon to Dallas.

“They’ve done a great job. They’re on a roll right now. I was a little worried that I’d come back and they’d start losing,” Smith said, humbling his NHL experience. 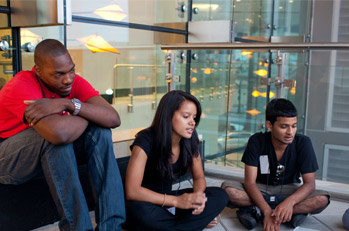