It only took 89 minutes, but just when both teams where ready to call it a draw, Corey Ashe and Brad Davis saved the day. Ashe connected with Davis, in the waning moments of the game, to steal it from Santos Laguna, 1-0.

“He has an awesome left foot, he’s good on the ball [and] they were kind of playing off him, so it allows Brad to turn, and when Brad turns, he’s dangerous,” Ashe said. “Not only that, but obviously it creates room for myself, so just his movement is awesome.”

The Dynamo were practically forced to score at home or shut out Santos in order to have a chance of advancing to the next round in Mexico next week. The 1-0 win was the first leg of the CONCACAF Champions League quarterfinals.

“I mean, I just saw with the goal and he’s got a trusty left foot,” Ashe said. “Any time it’s on his left foot you know something dangerous is going to happen.”

The Dynamo came into the game with a 31-game unbeaten home streak on the line and 17,454 were in attendance at BBVA Compass Stadium to see the streak extend to 32 games without a loss.

Although they narrowly won this game, it’s still anyone’s game for the taking with 90 minutes left to play in Torreon, where the return leg will be played next Wednesday.

“This is a good start, that team is very good home and away,” said Dynamo goalkeeper Tally Hall. “They’re especially good at home, so we’re probably going to expect a better team when we go to their place.”

With the next game in their stadium, Santos’ head coach Pedro Caixinha is confident that they will avenge their loss.

“We still have one more game before we play Dynamo,” Caixinha said. “I don’t want to talk about the return game, but I think Houston will have a very bad time.”

Houston did its job at home. They scored a goal and most importantly they shut out Santos in a two-game series where away goals are twice as valuable.

Now, the Dynamo has to maintain its 1-0 lead by tying in Torreon; a difficult task at hand considering that Santos plays much better at home.

“In this tournament it’s important that you don’t give up a goal either home or away,” said acting Dynamo head coach Tim Hanley. “We always go out to win, so do they, but I thought [we were] excellent from front to back.” 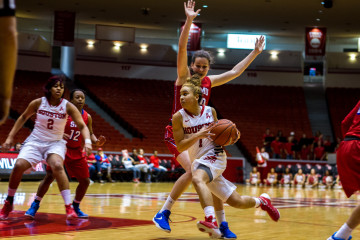