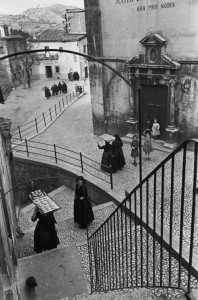 Up to this point, I have only heard 1 dimension of Cartier-Bression’s “Decisive Moment.” The dimension revealed was that the photograph hinged on catching that particular moment that defined the image. I was never aware that Cartier-Bresson wrote in-depth about this topic. Admittedly, I never really looked into it until I had the excerpt from his own writings in front of me. In reading Cartier-Bresson’s own words regarding “The Decisive Moment,” it is revealed that Cartier-Bresson not only looked for that magical moment, but he also obsessed over the composition of the photograph. It still all boils down to that one moment, but this adds depth.

Composition, according to Cartier-Bresson, is a reflexive action – the photographer knows instinctively when everything comes together. It is in that instant that the shutter is released. Of course, there are times when the “snap” of the photo is delayed because the photographer knows that an element is missing (or out of place) that does not complete the composition.

Geometry is also an important factor in composition. It is the geometry that ties all the elements together. This could be seen as conflicting with the “missing” element, but it’s easy to realize that proper geometry may be the missing element that causes the photographer to refrain from releasing the shutter.

Cartier-Bresson, in talking about the Decisive Moment, seems to tell photographers that it’s ok to rely on instinct when shooting. Much like the actions of a soldier in combat or a basketball player on the court, the reflexive knowledge of when the moment is right based on composition is more a product of instinct and training than anything else. This becomes hard to resolve as in art school the students are taught to eschew their instincts in favor of carefully consideration of the scene before them and only shooting after an intellectual analysis has been performed. To wit, one student in class even mentioned that she couldn’t shoot under conditions where she wasn’t able to plan the shots.

A lot of the other photographers we’ve seen up to this point (with some exceptions) in this class have constructed their shots (Rothstein comes to mind) or, in the case of many FSA photographers, have shot according to a script. Cartier-Bresson, while he may have been on assignment (with or without a script), reacted to the scene before him. While I can construct a scene, I find much more freedom in being able to react to what’s in front of me.

One final note – Cartier-Bresson regards cropping as ruinous to photography. It can be inferred that cropping is almost akin to second-guessing one’s instincts as it ruins the flow of what made the photographer release the shutter in the first place. In the very first photography class I ever took, the professor prohibited cropping of any kind on our silver gelatin prints. Her rationale was that we did not learn how to compose in the viewfinder by cropping in the darkroom. This is definitely in line with Cartier-Bresson regarding composition. Cartier-Bresson also opines that a poorly composed photograph is never going to be saved by cropping.

To continue reading and to view the world through Rick’s lens at Rickspicscorner.com

An Ode to Singles

Confessions of a Graduate: Part 2