WHEN JOHN DAVID GUTIERREZ told me he met the love of his life, I thought he was on drugs since he hated almost everyone on the rez. We were juniors at Red Cloud High School and one day during lunch, I caught him staring at the new kid, Ignacio Puente. Ignacio’s parents were missionaries from a Pentecostal Church in California, but they liked Pine Ridge so much that they ended up staying for good.

“Are you all right?” I asked John David. He didn’t answer me, but I heard him whisper “Please be gay,” over and over. He always made fun of me for saying “Please be single” whenever I saw a cute girl.

He didn’t answer me, but I heard him whisper “Please be gay,” over and over.

As the days went by, we saw Ignacio a lot – at school, Big Bat’s Convenience Store, Sioux Nation Supermarket, or in the street. Then Ignacio tried out for the Crusaders, the Red Cloud High School football team, and made it. He was the nose guard, I was the quarterback, and John David was the towel manager. Whenever Ignacio changed clothes in the middle of the locker room, John David looked at me and winked.

“I can’t hold it in anymore,” John David said after the last game of the season, so he walked over to a bare chested Ignacio in the locker room and popped the gay question. I closed my eyes, thinking Ignacio would punch John David in the face, but he laughed and said he’d answer the question later.

“Dammit Nimo, does everyone around here have to be straight?” John David said during our drive to Big Bat’s for dinner after the game.

“Real original, Nimo,” he sighed. “I’m the only gay person on this whole rez.” He reached into his backpack for his comb and he saw a note sticking out of his binder.

Yes. And I think you’re really cute, the note said. John David told me to stop the car, so I pulled over. He got out of my car and did somersaults along the road.

John David wanted to go to Jimmy’s over in Sioux Plains, his favorite restaurant, for his 24th birthday. While we waited for a table, John David hugged Ignacio and gave him a kiss, despite the stares he got from the other customers. The waitress came and said our table was ready, so we all went to the very back, away from everyone else.

“Happy Birthday honey,” Ignacio told John David, which made him blush. John David is a 200 pound bodybuilder but any pet name from Ignacio softens him.

After dinner, we planned to see a movie at the Showtime Center. Ignacio drove slower than usual and took a wrong turn twice. Then, Ignacio pulled over to a gas station to use the bathroom for a good fifteen minutes.

“That idiot knows where Showtime is, why the hell are we going on a tour of Sioux Plains?” John David said as we waited for Ignacio in the truck.

“Why aren’t you driving? This is your truck.”

John David was sitting in the driver’s seat when Ignacio came back. Ignacio offered to drive, but John David told him he wanted to see a movie before the world ended. We went down East 11th Street and made a left onto Little Bighorn Drive, right in front of Showtime Center. We walked to the box office to buy our tickets and then John David collapsed on the ground. 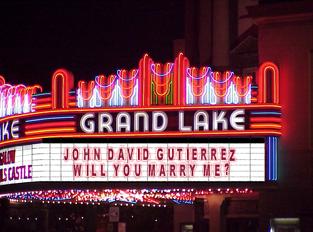 “Well?” Ignacio said. I looked up at the theater’s marquee sign: JOHN DAVID GUTIERREZ, WILL YOU MARRY ME?

“You idiot, why were you stalling me?” John David shouted.

“I had to, the theater said they wouldn’t have the sign ready until 8,” Ignacio said. I’d say about 300 people stared at the marquee sign in total confusion with me. John David always said he’d get married when it didn’t snow in South Dakota. Ignacio got on one knee and proposed to John David. Half of the crowd cheered and the other half pretended it wasn’t happening.

To read how their wedding in New York went read here

Darlene Campos is an undergraduate at the University of Houston’s Creative Writing Program. Her work has been selected for publication by A Celebration of Young Poets, The Four Cornered Universe, The Collegiate Scholar, The Aletheia, Linguistic Erosion, Prism Review, Houston & Nomadic Voices, The Writing Disorder, and Red Fez. She has been invited to hold readings of her short fiction by Avant Garden and Bacchus, both located in Houston’s midtown district. She currently works as a writer for The Daily Cougar newspaper and Kesta Happening DC magazine and is a fiction judge for Yeah Write Review.

Rick's Picture Corner: History of Photography in the 20th Century

An Ode to Singles

Confessions of a Graduate: Part 2