It was the band’s third appearance at the Houston Rodeo, the 14 song set included eight of the bands number one singles as well as other fan favorites.

The set list featured a wide range of music such as the ballads, Free, No Hurry and Goodbye in Her Eyes, feel-good song Toes, their upbeat two-step song, The Wind and the hard hitting southern rock tune, Uncaged.

The band opened up with Keep Me in Mind, from 2010’s You Get What You Give, and kept the crowd pleased quickly moving into two more hits, As She’s Walking Away and Knee Deep.

The crowd energetic and sang along constantly but the band themselves seemed to enjoy the performance just as much if not more, they switched instruments for certain songs, in particular the band’s guitarists, Clay Cook and Coy Bowles, who would switch between guitar and organ with Cook playing lap-steel guitar as well.

The biggest surprise of the night came when the lights went down after the band’s 2010 ballad, Colder Weather, and the iconic heavy drum beat of Metallica’s, Enter Sandman, started playing followed by the classic guitar riff, no organ was necessary for this song it was all guitars although it did feature violinist, Jimmy De Martini, playing the guitar solo on his violin. It also featured Zac Brown trading places with bassist, John Driskell Hopkins, who picked up vocal duties on the song.

Brown invited the crowd to sing the band’s latest single, Jump Right In, which was released Tuesday. Brown said that the crowd was the, “biggest choir in Texas.” he said, “I’m going to teach you a part of this song.” instructing the audience to sing along with the chorus.

The band closed the night with the 2008 single, Chicken Fried, which was introduced by the band playing America the Beautiful which featured Brown and Cook each singing a verse, the patriotic song brought the crowd to their feet and kept them standing for the band’s hit song.

Brown thanked the crowd saying, “Thanks for buying a ticket.” Staying humble to his fans he said, “We know where it comes from.”

The band’s latest album, Uncaged, was release last summer and debuted at number one on the Billboard 200 selling 234,000 copies in it’s first week, it included the singles The Wind, I Saw Goodbye in Her Eyes and Jump Right in. 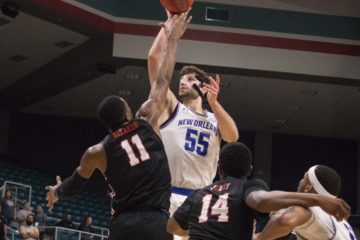