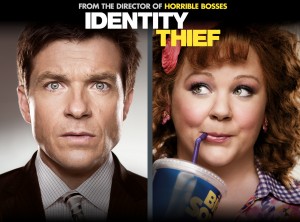 Identity Thief, one of this year’s funniest comedies starring Jason Bateman and Melissa McCarthy comes out on Blu-Ray and DVD June 4. Both formats come in a combo pack which also includes a digital download of the movie.

The video includes both the theatrical and extended unrated versions of the film. The unrated version gets even more raunchy than the original which was already filled with hilarious inappropriate humor.

Features included in the combo pack are a gag reel, alternate takes, The Skiptracer’s (Robert Patrick’s character) Van Tour, and the making of the movie. The making of the film gives an in-depth look at how the film was cast along with the explanation of how the film’s plot was conceived by star/producer Jason Bateman. The gag reel while brief shows the stars of the film having fun on camera while trying to keep their composure as they fall victim to the hilarious dialogue.

The film centers around Colorado-man Sandy Patterson (Bateman) who’s life is turned around after learning his identity has been stolen by a woman named Diana (McCarthy) who takes advantage of his name, which is constantly mistaken for a woman’s. He decides to find Diana who is many states away in Florida and bring her back to Colorado so that she can be brought to up on charges that he faced from crimes she committed using his name. The two run into even more trouble when they are chased by drug dealers and a skiptracer who is after a bounty for bringing Diana into the authorities.

The film features many small roles by many big name actors such as Jon Favereau, rapper T.I, Harold and Kumar star John Cho, Morris Chestnut, Modern Family’s Eric Stonestreet, Amanda Peet and McCarthy’s Bridesmaids co-star Ellie Kemper. The casting of these actors was a conscious decision as most of them are friends with the stars of the film and felt it would bring chemistry and more life to the characters which would otherwIse be small unimportant roles.

This combo pack is a great choice for anyone, a Blu-Ray/DVD/Digital Download is a value that no one can pass up. It allows the owner to be able to view the film from virtually any medium available.

Against Me! heads into the studio with Punk Veterans by their side