After the Zimmerman trial: Trayvon’s Legacy

Not guilty. And so a polarize debate over the role of race in American society rages on with even more fury.

The acquittal of George Zimmerman raises important questions about the role of race in the United States and for Latinos as a group. This is a debate made even more complicated by the existence of a Black President and a highly polarized political system, again in large part based on race.

One important question is whether most white people have a fundamentally different social experience in this country than do most Blacks and other people of color. To what extent do these differences color their perception of the “other”?

Of the Zimmerman trial, one of the obvious aspects of it that received little commentary was the fact that the process was so racially skewed. The judge was white, the defense and prosecution teams were white, the jurors (except perhaps for a Latina) were white. There was a clear absence of Black perspectives, which we know have a profound impact on how events and people are viewed in the criminal justice system.

This is particularly the case when the focus is on Black youth. The debate over New York stop and frisk policies, the disproportionate representation of Blacks in the prison system, the constant media attention on Black-on-Black killings in Chicago, and so on contribute to a stereotype of all Black youth.

Back in 1993, at an Operation Push conference, even Jesse Jackson, probably inadvertently, contributed to this stereotyping when he said that, “There is nothing more painful to me at this stage in my life than to walk down the street and hear footsteps and start thinking about robbery. Then look around and see somebody white and feel relieved. . . . After all we have been through. Just to think we can’t walk down our own streets, how humiliating.”

Anyone following the trial clearly saw how the absence of Black perspectives impacted on the interpretations of Trayvon Martin’s language and actions. The defense attorneys were misreading the meaning of common conversational words and phrases used by most Black youth, and did all they could to deracialize Zimmerman’s obviously racially informed comments about the Black youth.

The Martin family had achieved a victory in getting the legal system to bring Zimmerman to trial. In the process we were able to see, in excruciating detail, how biased that process was. The notion that references to racial profiling were not allowed and that the defense made attempts to demonize Trayvon were but two “color blind” indicators of how race played such a central role in this crime.

But perhaps most galling of all was the apparent lack of importance given to the fact that an innocent teenager was murdered for no good reason. Zimmerman should have stayed in his car as the authorities asked him to do to wait for the police — by simply doing this, Trayvon would be alive today. And to hear Zimmerman’s brother say that there was no need to feel regret over the incident because his brother did the rights thing, showed an unbelievable lack of empathy with the Martin family and the senselessness of his brother’s crime..

The whole discussion about Zimmerman’s race also displayed an amazing degree of ignorance about the Latino community. Many in the media referred to Zimmerman as a “white Hispanic” and others simple as “white.” This clearly simplified a white racism narrative but greatly distorted Latino realities in this country.

Latinos identify racially in a variety of ways, the majority indicating that they are “white.” But it is not clear that all Latinos view themselves racially in U.S. terms and its meaning in an American racial hierarchy is not clear. George Zimmerman’s mother is Peruvian and his father is a “non-Hispanic white,” which further complicates whatever his racial identity may be. At some points he stressed his Hispanic heritage to show that he was not a racist. Even if Zimmerman identifies strongly as being Hispanic, this is no automatic cure for racist thinking and behavior. In court, this argument wasn’t made. So his Hispanic identity was apparently situational.

The problem is that whether one is a white, black, Asian or a “some other race” Latino, racism is alive and well within the Latino community. Hell, there are many Latinos who are anti-Latino, or bigoted against Latino groups of national-origins other than their own. At the same time, with all of the racism that Latinos as a whole face with the increasing nativist attacks and racializing they are experiencing as part of the immigration debate, Latino solidarity with the Black civil rights movement seems to be growing every day. The justice for Trayvon movement has strong Latino support.

As we await expected actions to bring the case to the state courts, the federal government and a civil lawsuit, this issue will clearly not go away soon. It is important to understand its salience in communities of color and among socially conscious whites in the context of a series of developments largely driven by the Republican Party and conservative extremists that are clearly racially motivated throughout the country at all levels — the Supreme Court’s gutting of the Voting Rights Act and further weakening of affirmative action, the states that are promoting discriminatory voter ID and related suppression laws, the debate in New York over stop and frisk, the immigrant bashing that Latinos are experiencing, and on and on. It also points to the racial dimension of the gun control debate and measures like Florida’s stand-your-ground law. In this sense, the call for justice for Trayvon has a much larger meaning and impact beyond his particular tragic case.

The Martin family has pointed out that they want to make sure that their son’s legacy is respect edand preserved. There is a growing movement that agrees.

Angelo Falcón is President of the National Institute for Latino Policy (NiLP), a nonpartisan policy center. He can be reached at afalcon@latinoipolicy.org.

After the Zimmerman trial: Trayvon’s Legacy 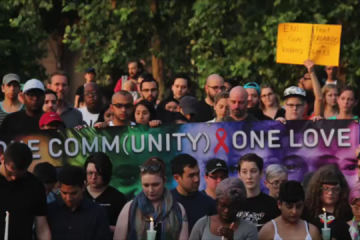