The Texas Historical Commission has slated El Barrio Del Alacran, a historic Latino neighborhood that was demolished in the 1950’s to make room for public housing, as one of the next areas to receive a marker dedication.

The Mexican Revolution of 1910 and continued industrial development led many Mexican immigrants to Houston in search of jobs at the local factories. They settled in the area of second ward close to downtown that was formerly known as Frost Town, but then became a powerful and colorful Mexican neighborhood from the 1930’s to1950’s known as “El Alacran”.

“El Alacran” was one of the most underserved neighborhoods in the city and referred to by many as a slum. While the area had its social ills, it also produced a generation of Latino leaders that would usher in the civil rights movement.

Carlos Cabillo, a local filmmaker and activist, is currently working on a film about the neighborhood and has conducted extensive interviews
with former residents.

“El Barrio del Alacran was a community that had activities such as bootlegging, prostitution and gang-banging, that is certain. But this was a neighborhood that had families who struggled to nurture and feed their families, who worked hard to move forward in life and who cared
and looked out for each other in spite of the societal milieu in which they found themselves,” said Cabillo.

According to the City of Houston Archaeological and Historical Commission, the construction of US 59 demolished what little was left of “El Alacran“.

Kirk Farris, a local artist and environmentalist, donated the funds for the marker to get made.

The proposed location for the marker will be at 1900 Runnels (about 25 feet north of Runnels within the right of way of US 59). Below you will find the proposed inscription. Once the THC obtains a date for the dedication, it will be posted it here.

BETWEEN 1910 AND 1920, HOUSTON ATTRACTED A LARGE NUMBER OF MEXICAN IMMIGRANTS AND MEXICAN AMERICANS TO THE SECOND WARD WHERE THE OLD NEIGHBORHOOD OF FROST TOWN OFFERED INEXPENSIVE HOUSING FOR INDUSTRIAL WORKERS. IMPOVERISHED CONDITIONS IN THE 1930s LED TO A NEW NAME FOR THE AREA – EL BARRIO DEL ALACRÁN, THE NEIGHBORHOOD OF THE SCORPION. ALTHOUGH FAMILIES IN THE ALACRÁN LIVED NEAR POVERTY, CHURCHES, THE RUSK SETTLEMENT HOUSE, RUSK SCHOOL AND SPORTS LEAGUES PROVIDED SOCIAL AND EDUCATIONAL SERVICES FOR THE COMMUNITY. CONSTRUCTION IN THE 1950s DEMOLISHED THE ALACRÁN. EL BARRIO DEL ALACRÁN REPRESENTS THE QUEST OF MEXICAN IMMIGRANTS FOR INTEGRATION INTO AMERICAN SOCIETY. (2013) 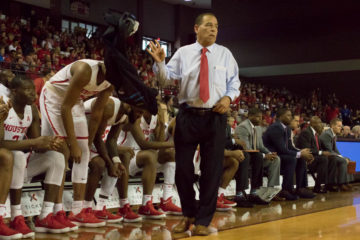