The Houston Rockets have become a hub for some of the most dominating big men to ever step foot on the hardwood. From Moses Malone, to Hakeem Olajuwon, to the more-recent Yao Ming, the Rockets have almost always had a physical force in the paint.

In July, the Rockets added yet another great big man to their storied franchise with the addition of the always-smiling Dwight Howard.

“This is a great feeling to be here, to have a fresh start,” Howard said. “I’m so excited.”

Howard, the most highly sought-after free agent, was introduced by the Rockets in front of a star-studded crowd, which featured former Rockets Olajuwon, Yao, Clyde Drexler, amongst others.

After having a down year with the Los Angeles Lakers, where he was at the center of much scrutiny, the former three-time Defensive Player of the Year sees the Rockets as a place where he can be happy playing basketball again.

“I just want to get back to being that guy who’s having fun and enjoying basketball and at the same time dominating,” Howard said. “And [do] that with a smile on my face.”

With Howard going to the Rockets, he joins a young, fast-paced team and forms a strong one-two punch with All-Star guard James Harden. He brings a strong presence in the paint, which is essential to what this team hopes to accomplish: bringing an NBA Championship back to Houston.

“Our goal is to win a championship and that’s what we’re going to strive for every day,” Howard said. “We know that it takes a lot to win a championship; it doesn’t just happen just because you have guys come together. We’re just willing out there to give it our all and I just cant wait to get out there with these guys.”

A raucous crowd serenaded Howard with loud cheers, despite waiting in the sweltering Houston heat for hours. Howard’s presence alone rejuvenated the hopes of Rockets fans that they can win another championship, their last being in 1995.

“I think he’s a great addition to the team,” said rapper Bun B. “I’m looking forward to the 2013-2014 season and I think we’re closer than we’ve been in a long time to bringing another championship back to Houston.”

However, Howard knows that it will take time for them to come together and become a contender. With other teams making key additions, the quest for an NBA Championship won’t be easy, but he sees a bright future for his squad.

“I’m not going to get up here and say we’re going to win five championships,” Howard said. “If we really dedicate ourselves and sacrifice everything we got for a championship, at the end of the season, we should be holding up the trophy.” 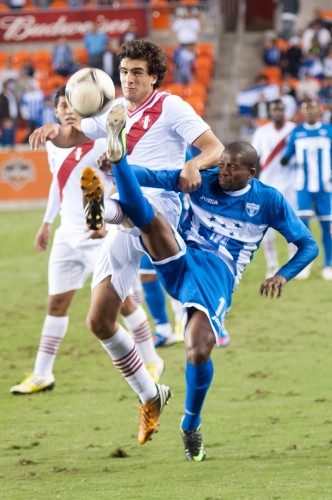