July 28, 2021 Francisco Casillas
Home»Entertainment»Behind the curtain with the cast of “Ghost Team One”
Entertainment/Features/Uncategorized

Behind the curtain with the cast of “Ghost Team One”

What would the results be if a man, his best friend and a beautiful yet crazy woman grabbed a camera and investigated their house in search of the paranormal? “Ghost Team One” is a hilarious movie that feels like a parody on the ghost hunting genre and the rise in paranormal related movies while still encompassing characters and a story that keeps the audience interest.  Recently, I had an interview with some of the cast members and the directors of the film.

Breanna Cleveland: What did you find the most interesting about being on the set of “Ghost Team One” Ms. Romero?

Fernanda Romero (Fernanda):  It is very rare to have such an amazing cast and energy. So I think the mix is what made the movie happen. I really, really enjoyed working with everybody and I think we had the opportunity to bring something different and be creative. It was nice.

Cleveland: Is there any advice you would like to give for anyone trying to be a part of the video production side of the film industry?

Ben Peyser (director): Have very wealthy family that can support you for 400 years number one. Number two, I would say you just gotta do it. It’s very cliché but moving to Los Angeles helped. And even if you don’t live in Los Angeles, just go out and make stuff. It’s very important to take every opportunity. Like this film for Scott and I, we didn’t realize we were going to be doing it. So it came about very quickly, very last minute and it could have been a disaster but Scott and I really wanted to work together to do something. And we thought, who cares if it’s a failure let’s just make something and have fun doing it. And it turned out to work out well.

Scott Rutherford (director): I would say make sure you love it and if you love it, just keep doing it. Because it’s gonna be a long time before any of the glitz and glamor sets in. So most of all, you gotta be doing it just because you love doing it. So the message is do it, just do it.

Cleveland: What is it that made you two interested in being in “Ghost Team One?”

Carlos Santos (Sergio): In my case, I didn’t have a choice or chance to be interested in anything. I got called up and I kind of just went through the rabbit hole. I had met a producer on a Wednesday that I hadn’t seen for years and we touched base about stuff. I talked to him and thought nothing of it but then that Friday, he called me up saying his friend was frantically looking for a Latino comedian since the original lead had just dropped. So, basically I got called in, auditioned on Saturday, and was offered the part. I got to love everything about it during the process

J.R. Villarreal (Brad): For me, like Carlos, it was just an opportunity. And as an actor out here, you have to take advantage of every opportunity you get. I think more than anything I got lucky when I sat down with Scott. We got along so well and were kind of on the same page and same wave length. When all the key members started to come, it was like they all fell right into place. Like as if they were all perfectly pieces missing from the puzzle. So I think we all got lucky for the fact that it came out so well because, if certain individuals were not a apart of the film it definitely wouldn’t had been the same.

Cleveland: I know both of you have had a variety of different roles throughout the years but would you two say that this movie was possibly the most interesting role?

Santos: I’m just getting started. This is my first lead in a movie so it is the most interesting role I’ve ever done. I’ve only done shorts, and gone over the whole thing of comedy and sketch. So this is definitely number one as of right now, but check back with me in a few months.

“Ghost Team One” can be found on VOD, digitally and in select theaters now.

Behind the curtain with the cast of “Ghost Team One” 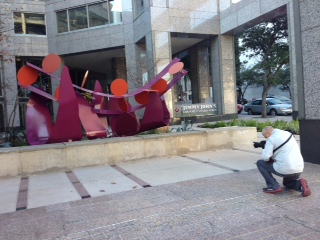