A weekend crime spree ended with the arrests of three Houston teenagers this past Sunday night.

Brenda Flores, 19, Neiman Gasper, 17, and an unnamed 14-year-old male are all charged in a series of aggravated robberies and burglaries.

Deputies arrived at a vacant residence in the 6000 block of Plantation Crest Drive after a realtor who was checking on the home noticed people inside and called 911.

Police found a carjacked SUV in the garage that was stolen from the 18000 block of FM 529. Officers also recovered several other items including numerous baskets of alcohol that were stolen from a business in the 14000 block of Cypress Rosehill Road.

According to police, the trio also robbed an individual at gunpoint in the 17600 block of W. Copper Lakes Drive early Sunday morning.

The neighborhood where the teenagers were arrested is no stranger to crime. There have been at least 22 reports filed with police in October alone. Eight of those reports have been for similar cases of breaking and entering.

All three suspects have been charged with aggravated robbery with a deadly weapon and burglary of a business.

Gasper’s bail is set at $80,000 while Flores is being held without bail.

Investigators are looking into whether the suspects are also responsible for other robberies in the area.

Students give their thoughts on this year’s election 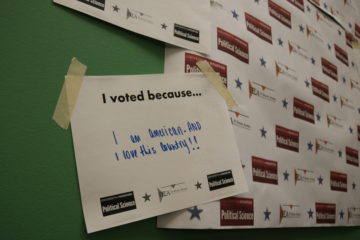