Even though his family and friends told him to pursue a computer career which is traditionally more steady and has a high earning potential, Armando Gonzales decided to follow his dream of becoming a professional photographer.

Gonzalez co-founded Stop Focus Studios in 2012, and in less than a year has made a name for himself among aspiring models. His founding partner left the company to start a baking company.

“I always felt the need on doing what I really love to do and that’s photography,” Gonzalez said.

While working and going to school at Devry University for a bachelors in multimedia design, Gonzalez continued to pursue photography in his free time. To his surprise, after just a few photo sessions with the help of his friends, his work started to get noticed by a multitude of people

“A year ago, I used to work for a gas station, and they always checked out my photographs,” said Gonzalez, “they always asked if I was ever going to pursue my dream and I told them yes.”

The inspiration behind Gonzalez’s photography is Nebraska photographer, Jake Olson.

“He is one of the best photographers in the world. His work is one of a kind,” Gonzalez said.

Stop Focus specializes in fashion editorials. Many of his projects come from word of mouth among aspiring fashion models. They circulate his contact information when they are happy with the results of their photo sessions.

To help him meet client demand, Gonzalez teamed up with Chris Trejo, another up-and-coming photographer. By challenging each other and offering constructive criticism, the two help push each other to become better photographers.

Even though the studio is doing well and work is plentiful, Gonzalez plans to go back to school to pursue a degree in photojournalism.

“Till this day I don’t regret the decision I made when I quit my job to become a full time photographer,” Gonzalez said.

Dennise Barajas: What do you think about instagram?
Armando Gonzalez: Well, I don’t use it much, but a photo I posted that I took in Pasadena received more than 230 likes in less than a minute.

Barajas: What’s the most interesting and crazy photo shoot you have ever done?
Gonzalez: The interesting and craziest photo shoot we ever had was last year, on Halloween with Stephany Grand Dutchess (MUA cosmetics) and Chris Trejo (photographer). We had four models and Stephany did all types of crazy make-up on them and Chris stayed up 2 days for this shoot because he was so excited. We did the nurse from “Silent Hill”, the vampire from “Dusk Til Dawn”, the evil girl from “The Grudge” and the cheech from the movie “Cheech and Chong.” We stayed up shooting probably untill 3 to 4 a.m., and then we had to edit all of those pictures the same day. Never regret that day because everyone had fun.

Barajas: If you could have photograph an artist who will it be and why?
Gonzalez:I would have to say Edward Maya, because their music is what gets me in the zone while shooting and editing and their music videos are a real work of art

Behind the curtain with the cast of "Ghost Team One" 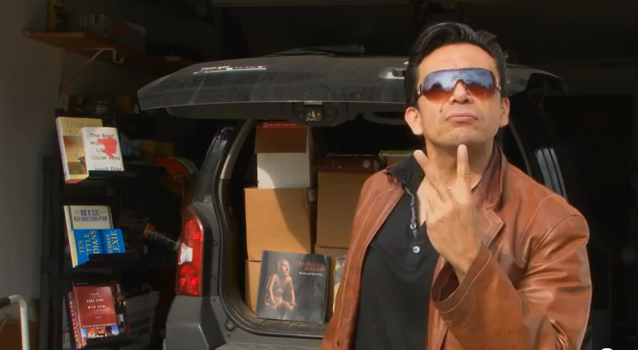