Recently released documents by the University of Houston-Downtown and obtained by The Venture through the freedom of information act, shows that the school hired Stamats, a higher education marketing company, for approximately $50,000 to oversee a failed attempt to change the university’s name.

“Stamats is a leader in higher education marketing. They were chosen following an RFP (Request-for-Proposal) posted by the university and after considerable work with a local marketing firm and by internal UHD staff,” said Claire Caton, Director of Media Relations at UHD.

In September 2008, former President Max Castillo announced the university was seeking a name change. The statement and resulting research by Stamats touched off a furor among students, local politicians and faculty.

UHD officials envisioned a distinct identity for the university that would eliminate confusion among donors and student applicants with the UH flagship campus which is less than 10 miles away. Critics did not buy the university’s rationale and pointed to the fact that UH-Clear Lake and UH-Victoria would both keep their respective names.

UHD is a separate university and not a branch of UH.  Students, alumni, faculty and staff members were divided on the issue.

Those against the name change worried that a new name would cause further confusion, and that it would lead to an unnecessary explanation, regarding the name change, to their potential employers. Those in favor of a new name believed that it would give the university the opportunity to reach a tier one status, without being overshadowed by the UH main campus.

The renaming effort ultimately stalled, but only after UHD spent $49,500 on consulting services.  Efforts to reach current UHD president, Bill Flores, proved unsuccessful as he was out of town. Stamats did not return calls or emails seeking comment.

During a town hall meeting in April 2009, former Provost Molly Woods confirmed the hiring of Stamats, Inc. to continue the search of a new name for UH-D.

As a condition of the contract, UH-D provided Stamats with up to 30,000 e-mail addresses of students, prospective students, faculty and alumni for the web survey. Consultants from the company also visited the campus to conduct focus groups and interviews.

“It’s absurd to have paid $13,000 for an automated e-mail invitation to take a survey,” stated Student Government Representative, Ivan Canales.

To include community involvement, UHD created an online survey where students could input their thoughts regarding the name change, including suggestions for names.  The web survey is no longer available, and in its place is a set of questions answering the student’s most pressuring questions.

Houston City University received 1,702 votes compared to 401 for City University.  Over 400 students chose neither. A lackluster response considering UHD had over 12,000 students and 27,000 alumni at the time.

When current students were told of the money UHD invested into the failed name change sentiment was once again divided.

“I do not agree with the funds going to waste regarding the project of the UHD name change. Not a single difference was made,” said Jesus Fernandez, a Computer Science major at UHD.

“I believe that our university made a considerable investment rather than expenditure. Oftentimes, these type of projects produce eye opening data that redirects the vision of the initial project. In our case, the investment to conduct extensive research before changing the name of our university was a smart and safe decision to make. Otherwise, the change of name could very easily lead to a much larger expense that comes with the idea of rebranding the entire campus. We would have had to replace business cards, banners, ads, and other stuff associated with the name,” said Valdez.

Tuition was raised shortly after the contract with Stamats was signed.  Administration officials say the two have no correlation.

Behind the curtain with the cast of "Ghost Team One" 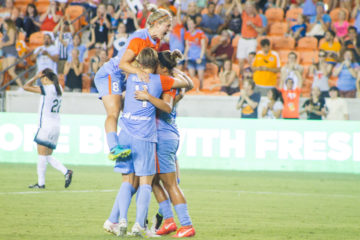