Recently obtained documents by The Venture show that Harmony Public Schools paid an outside public relations firm $25,000 for a 10th anniversary promotional video that has received 4,700 views on YouTube to date. The school entered into the contract with the firm while it had a preexisting contract with a production company that offered cheaper rates.

The findings are the latest that raise concerns over Harmony’s fiscal management.  In recent years, Harmony, the largest charter school system in Texas, has been racked with controversies ranging from a state investigation for possible misuse of public funds to potential ties to an obscure Muslim organization.

The $25,000 video amounts to nearly 4 percent of Harmony Public Schools’ 2010 to 2011 budget for instructional resources and media services according to the released budget reports on Harmony’s website.

“The video was a professionally-produced, narrated video that was designed to be a long-term way to visually tell ‘the Harmony story,’” Director of Communications Julie Norton said.

In 2008, Harmony awarded a $700,000 contract to Helix Design and Production to produce all of its media content. The contract covered everything from video production and editing to designing and printing business cards and brochures for the entire school system, including the central administrative office, Helix President Abe Suzek said.

But Harmony worked with Burson-Marsteller, a public relations firm specializing in reputation and crisis management, in 2010 to produce the $25,000 video. Burson-Marsteller then outsourced the video production, which included several onsite days of shooting, to a different firm despite having signed a contract with Helix.

“[The video] was structured for use in numerous formats, including at events, online and with key stakeholders, to help bring to life the experience a student has at Harmony and the value the school brings to them individually and to their community,” Norton said.

The video, which lasts five minutes and shows why Harmony schools are better then public schools, should have cost a fraction of the amount, or $5,000 to $7,500, estimates former president of the Houston Professional Videographers Association Rolando Guajardo.

Prices for video production are subjective and vary from company to company. However, Guajardo says the price for this video seems to be too high despite the finished product.

How Harmony is using the video may account for the relatively low number of views on YouTube, says owner of IC Films Ivan Castillo.

“A lot of the times companies get a production company to make them a video so they can use it during presentations for more clientele,” Castillo said.

The cost of the promotional video is just the latest concern tied the charter school system with 40 campuses across the state that serve more than 25,000 students. The non-denominational school founded by Turkish-born immigrants has faced multiple allegations of ties to an Islamic movement known as the Gulen Movement as well as allegations of unfairly granting construction and catering contracts to Turkish companies despite local firms that made lower-priced bids.

The Gulen Movement is a cultural and educational movement based on the core principles and teachings of Islam and Fetullah Gulem, the movement’s founder. Harmony continuously denies any affiliation with a religious movement and even addresses the allegations on the Frequently Asked Questions section of its website.

Allegations of favoring Turkish companies over others are untrue, says John Kyte, a Burson-Marsteller consultant to Harmony.

“Harmony Public Schools does not discriminate on the basis of gender, national origin, ethnicity, religion, or disability in its programs, employment, admissions or selection of vendors,” Kyte said.

Kyte added that price alone does not determine a winning bid for a contract.

“Harmony always selects the lowest and the most responsible bidder on projects that are put out for bid; both criteria need to be met,” he said.

These allegations prompted an investigation by the Texas legislature, and a 2012 audit found that Harmony misspent $186,197 of federal grant money. Harmony repaid the amount in full and claims the findings were a result of improper documentation.

Despite the multiple controversies tied to Harmony, some people are praising the charter school system for its work.

“The school that costs less and gives a better education is a win-win, and that’s something we should be supporting. That’s exactly what they’re doing here at Harmony,” Congressman Pete Olson said in the $25,000 promotional video.

Neither congressman Olson nor his office would comment on his appearance in the video despite multiple phone calls, emails and tweets.

The Texas Charter School Association, which provides charter schools with training in finance, governance, board leadership and more, was unfamiliar with the promotional video produced by Harmony and instead forwarded all media inquiries to Burson-Marsteller. However, Burson-Marsteller had no further comment on the issue.

The use of promotional videos altogether is a questionable strategy, says Dr. Laura Turchi, an education professor at the University of Houston.

“As a PR strategy, I think it would be hard to create one that would really capture the attention of big-bucks funders,” Turchi said.

Why the Texans shouldn't draft Johnny Manziel at #1 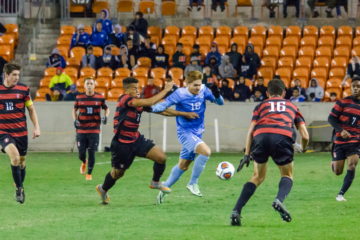