After two recent incidents at tournaments in Asia, international basketball’s governing body is coming under fire across the world for its policy banning Muslim and Sikh players from wearing traditional religious headwear during games.

Since the incidents involving Indian players, FIBA’s policy against turbans and hijabs has drawn international outrage. India’s coach, American Scott Flemming, protested the ban before the game in which Amritpal Singh and Amjyot Singh were not allowed to play while wearing turbans, and the most recent ban sparked a social media movement under the hashtag #LetSikhsPlay. A petition on Change.org(via Mike DeCourcy) calling for an overturn of the ban has already garnered more than 50,000 signatures.

Prominent Indian athletes and musicians have joined the calls to overturn the ban, and Indian Basketball Federation officials filed an official complaint with FIBA last week. Two members of Congress, Reps. Joe Crowley (D-NY) and Ami Bera (D-CA),wrote a letter to FIBA that called for the overturn of the “discriminatory” ban on clothing that is “essential to their faith.”

The players both said they were “humiliated” by the demands to remove the turbans before the game.

FIBA has previously defended its rule against headgear, saying that it is meant to protect other athletes from injury. But as Simran Jeet Singh has highlighted, players have worn turbans while playing college basketball in the United States and professional basketball in Canada without incident.

FIBA has faced similar calls to overturn its ban on religious headwear from the Muslim community, particularly after Indiana State University basketball player Bilqis Abdul-Qaadir said that the rule had put her in a “holding pattern” as she sought a professional contract in Europe, which adheres to FIBA rules. Abdul-Qaadir wore a hijab throughout her high school and college careers but would not be allowed to in European professional leagues, putting her career in jeopardy. The Council on American and Islamic Relations also highlighted the case of Indira Kaljo, a Bosnian basketball player who also sought a professional contract in Europe but had concerns about the hijab ban, in calling on FIBA to change its rules. A women’s team from the Maldives forfeited its game at the Asian Under-18 championship last week when they were not allowed to compete in hijabs.

The basketball federation is behind other international sports organizations. FIFA, soccer’s governing body, preliminarily lifted its ban on hijabs in 2012 and fully lifted the ban on religious headwear, including Sikh turbans, earlier this year after determining that they had no bearing on the safety of soccer players. The International Olympic Committee, which worked hard to help include more Muslim athletes in its events, helped persuade the International Judo Federation to allow Saudi Arabia’s Wodjan Shahrkhani to compete at the 2012 London Olympicswhile wearing a modified headscarf. Safety concerns were an issue for the IJF as well, but Shahrkhani competed without incident just as the Sikh and Muslim basketball players have.

Aside from the important religious discrimination concerns, the ban is harmful to efforts to promote access to the sport in many parts of the Muslim world, where women already often face barriers to sports participation before international organizations like FIBA tell them they cannot wear hijabs to play.

FIBA officials will reportedly reconsider the ban at a meeting this week. If they are paying any attention at all, it ought to be a quick, easy decision. 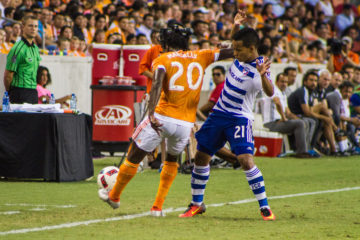