ABC News Anchor and Chief National Correspondent, Byron Pitts, joined students, parents and staff on Monday at the Cullen Performance Hall to talk about the stories he shares in “Step Out on Nothing.”

This year, Pitts’ autobiography “Step Out on Nothing” was selected for the 2014 Provost Summer Read program, where more than 1,200 freshmen students participated and read the book.

“I felt like I had reached a point in my life where I wanted to encourage people,” Pitts said. “…what I wanted people to take away from the book was that if ‘he can do it, there is no reason (you) can’t.’”

In his autobiography, Pitts talks about the multiple people who stepped out on nothing for him and highlights them throughout the seminar.

Throughout the seminar, Pitts talked about the stuttering problem he had while growing up. Pitts shared that he did not learn to read until he was 12-years-old. It wasn’t until he approached middle school that he was tested, due to his academic downfall. The tests indicated that he was mentally retarded.

However, his mother saw different.

“I like to say that my mother, was for me, was the first person in my life to step out on nothing for me,” said Pitts at the seminar. “Nothing in her background suggested she had the background necessary to help me.”

Despite his academic history, Pitts shared that he and his siblings went on to be the first generation in his family to go to college. However, Pitts first year in college was anything but easy.

“I get to college, excited, enthusiastic, living the dream,” Pitts said. “… so I take freshman English and I get an F.”

Pitts went on to take the class for the second time and was asked to withdraw from school by his English professor. However, he doesn’t.

“I realize that I’m filling out these papers to leave school, and I’m not only abandoning my dreams but my family’s dreams,” Pitts said. “About this time a stranger walks in … A first term English professor … she didn’t simply change my life, she saved my life.”

“She helped me finish college.”

Not only did Pitts talk about those who influenced him, but he gave time to those who read his book expressed the impact the book had on them.

“When you were speaking, I had tears in my eyes because this book has really touched me,” said a student to Pitts before the seminar ended. “It’s instilled me with a faith that I can have a great college experiment and that I can step out on nothing for someone else.” 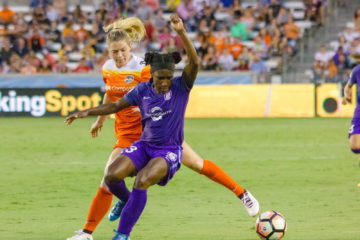