It was a full house at the University of Houston Moore’s Opera House on Wednesday night as many awaited the innovative and groundbreaking artist, Laurie Anderson.

Anderson was chosen to deliver this year’s second annual Mitchell Artist Lecture on Sept. 10. Last year it was given by Bill T. Jones.

The veteran artist and musician has many titles including filmmaker, performer, and writer. But, there is one title in particular that she prefers to be referred as.

“I am a storyteller,” Anderson said.

Throughout the lecture, Anderson spoke about her film, which includes an experimental use of art, music, and technology.

In her soft spoken and eloquent manner, Anderson captivated the audience with a series of stories in her film, while showing various images on a screen.

One story in particular involved her dog, Lolabelle, which impacted the listeners, as it began as a lighthearted and funny memoir, that turned into a dramatic twist that left the auditorium speechless.

Anderson spoke about her fascination with dogs, and how she uses them as inspiration in her stories. She intrigued the audience with a video of her blind dog playing the piano.

Dean Gladden, a spectator at Anderson’s lecture, expressed how much he enjoyed the presentation.

“It’s really refreshing to have someone who can look at life in a different way and talk about normal things that happen, yet twist those things and make you think different,” Gladden said.

University of Houston student Michelle Velasquez was in awe of Anderson’s storytelling.

“She was one of a kind,” Velasquez said. “As an aspiring artist myself, it’s so nice to hear a veteran like Laurie talk about her experiences and how she defied the boundaries of experimental art.”

Anderson’s storytelling has captivated audiences and taught them lessons of life. Before she left, she shared two nuggets of life that allows her to keep doing what she loves most.

“Don’t care what other people think of you,” Anderson said. “Be tender, always.” 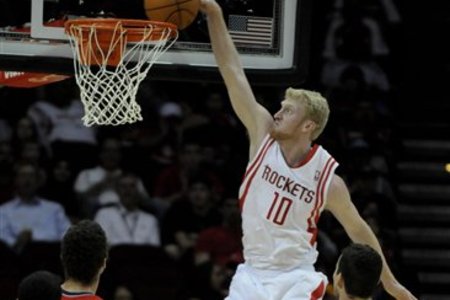